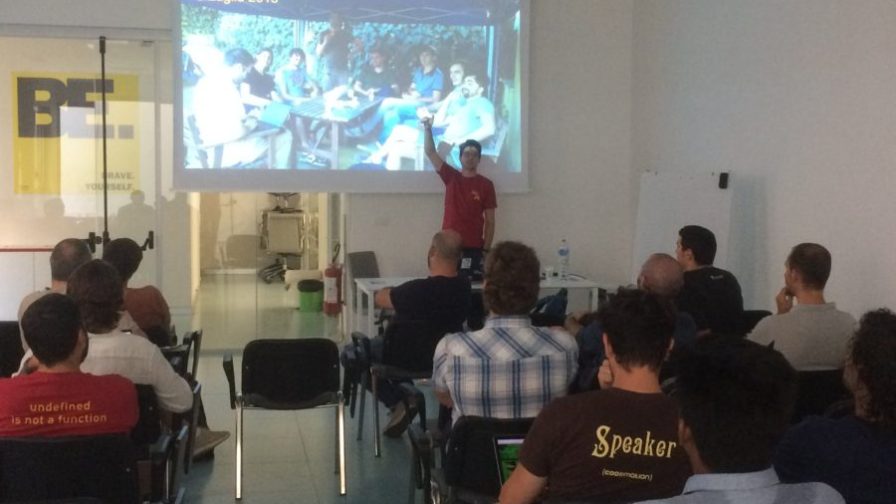 Hello Matteo, some time ago at one of the RomeJS meetups you talked about Serverless. Can you tell us more about it?

In the talk, we aimed at bring an application, mainly JavaScript, onto the Serverless appearance. Serverless is an infrastructure where you do not have servers under management but instead you have web interfaces, on which to load your script and in the end, you pay for the actual consumption of resources. A main example is that of AWS, in particular Lambda, which is a Functions-as-a-Services service, i.e. I load one of my functions there and when I invoke it, it will be performed and give me my output and I pay only for the execution time of the function. In addition, what we went into later was the Serverless framework that lets you easily write these functions, as well as the deployment to different providers, such as Microsoft’s Azure and Google Cloud. For those who want to learn more, there are many online resources on how to create Serverless servers, how to separate things and how to deploy.

Remaining within the Node.Js framework, the Serverless framework documentation is very well done. It is definitely a quite different approach than normal, so I recommend that those who approach become familiar with the normal server. It’s a different paradigm of how to structure your application that brings advantages and disadvantages, as in all things. But being a different paradigm, a basic knowledge about servers is required in order not to run into trivial problems.

Your Node.js API in Serverless world | Matteo Manchi from Codemotion

Can you tell us why you decided to talk about this specific topic?

The choice of topic was decided on from the fact that I was using it on a mini personal project. I had read about this topic, became interested and wanted to experiment and I tried this framework. I wanted to use it on personal projects because you have a low use cost, and as you don’t have to pull on the server, this is definitely a plus point. As for downsides, at the time of having a constant flow, the payment model may not be so cheap compared to having a fixed server turned on.

Thanks Matteo. We hope for more talks like this from you in 2019! But first, for whose who don’t know you, tell us a bit about yourself…

My name is Matteo Manchi, I am the CEO at Advance, a consulting company belonging to the Impronta Group. I’ve been the RomaJS community leader for four years. Obviously, I also participate in other communities such as PHP User Group in Rome. RomaJs is the community dedicated to JavaScript, a technology reflected in all areas of the web, from front-end to back-end and developer tools.

As for my passions, I can say that all of them are very close to the issues of the community. In fact, I try to carry out personal projects or contribute to some open source projects. But one of my passions that differs a bit from all this world is magic, the famous card games with which I spend some of my free time away from the computer.

And can you tell us why did you choose a career in the IT industry?

I was super lucky to have a computer at home since I was a child and I enjoyed working with the PC from the very beginning. Over the years, I approached the development part and that’s how my passion became my job. I transformed what I did in my free time into something profitable. Initially, I learned everything on my own, I followed articles and forums to delve into concepts that I did not know and then learned. I got my degree in Computer Engineering. Even now I keep up-to-date following blogs, news, Twitter, blog posts written by other more or less famous developers and I also attend some events that give me the chance to be compared with some other developers. I attend the communities meetups as well.