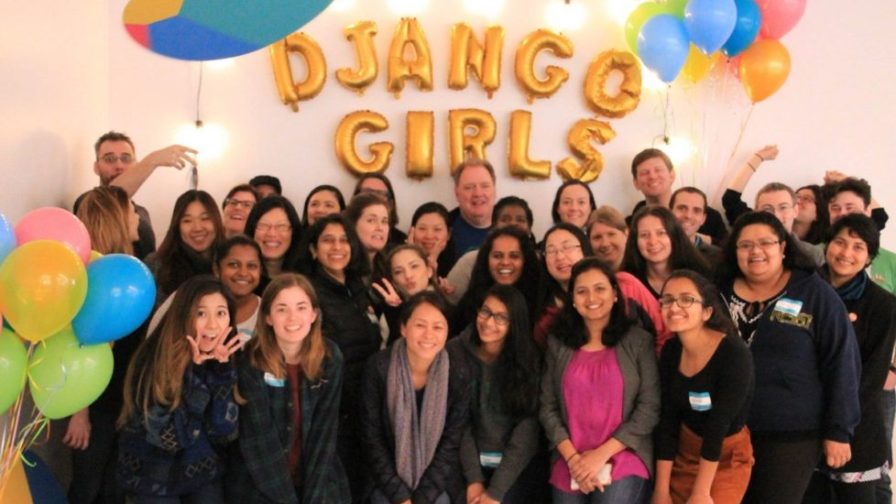 Milan is a hotbed of community groups, building developing schools in English and Italian. We spoke to some of those involved to find out about the challenges, opportunities, and what insights they have to share with others interested in starting their own groups locally.

Django Girls is a not for profit community that empowers and helps women to organise free, one-day programming workshops by providing tools, resources and support. During each event, 30-60 women build their first web application using HTML, CSS, Python and Django. We spoke to Django Girls Italia organisers, Sabrina Scoma and Fiorella De Luca. Sabrina shared that their chapter started small in 2015 but grew through outreach efforts across Italy: “We started creating workshops, delivering talks to conferences and expanding, and now we are doing it still, trying to reach out to more female in tech.”

The broader community includes awesome swag, teaching resources, and a multitude of organising tours. The Italy group has a slack community of over 300 women and a newsletter database of over 1000, both tools that enable the organisers to get valuable data about their community. Fiorella explains that:

“Many girls found work after a workshop or started a programming course. We don’t offer a kick start in programming; we aim more at inviting more female to join programming.”

Other women sharing their experience is a keen motivator for participants.

The group uses Codemotion for building a broader connection and considers the conference “very relevant. We want to find events where we can collaborate with other communities.”

In Italy, community management is not as valued as in other countries: Shetech

Chiara Brughiera is managing director of Shetech, an Italian association dedicated to supporting women in the world of technology, digital and entrepreneurship, through networking events, training workshops and professional opportunities. The extensive range of activities includes female founders dinners and pitching opportunities, workshops in public speaking, problem-solving, personal branding and video content creation. The group partners with organisations such as Github and Cisco and a range of support networks for female developers and entrepreneurs.

Chiara shares that she was first exposed to community management in Stockholm but notes that:

“In Italy still this job position doesn’t have the same value of the Northern countries. It is not taken as seriously as important and it is like speaking about happiness and unicorns.”

The group benefits from online tools such as Facebook and Chiara personally rates the Italian community manager summit held twice each year for helping organisers. She also recommends the use of community canvas for identifying your community.

Angular Roma runs regular events that focus on learning about Angular, sharing knowledge and networking. We spoke to community manager, Marco Matascioli and Luciano Murruni to find out more. Marco commented that:

“Italy is slower and not so digital like other countries, that’s why we count on broadening our framework abroad rather than in Italy.”

“We want to support people that are not able at solving tech problems, and we want to help each other to get to know the framework better, with meetups and talks for explaining and leading developers from junior to seniors. We use Slack and other social platforms to be reachable.”

According to Luciano “Social networks are super important, especially meetup.” However, he notes that Google Drive Platforms can be challenging to manage because of all the different accounts. The group is working with Codemotion to “broaden our target audiences and improve our organisational efforts” with plans to also expand into Milan.

There’s a need for resources for developing in Italian: Milano Chatbots Group

Paolo Montrasio is a long-time developer and one of the community members of Milano Chatbots Group, created in response to the growing complexities in chatbot creation. Paolo explained that traditionally chatbot resources were created in English, with other languages preferenced next, meaning it took a delay before Italian language-specific tools. Paolo detailed that the group is “working on improving the Italian version of software to develop chatbots that could appeal to agencies.”

Milano chatbots group was born on Meetup, with an active Telegram group, YouTube channel, and resources on Medium. The group uses Eventbrite and Facebook to plan, schedule and promote events, with plans to expand into Twitter and LinkedIn in the future. They were involved in several AperiTech events throughout Italy which offered an excellent opportunity for networking.

Paolo notes that the group sometimes challenges to find speakers and hopes that networking at significant events such as Codemotion will assist.

Alessandro Lai is Project lead developer @Facile.it, secretary of PHP-FIG, and one of the organisers of the PHP Group Milano. Alessandro considers PHP a language that is evolving and taking the example of other languages that aren’t so users friendly, and trying to improve every day.

PHP-FIG “gives insight about PHP work, and we are trying to standardise knowledge for developers. The group was born many years ago.”

Alessandro shares that continuity is the worst part of community management. “Mostly I am alone when organising events, so the help of companies is invaluable, especially in finding speakers.”

The group uses slack for internal communication. Alessandro notes that:

“Meetup enables us to reach out to people that are also outside our bubble and achieve broader visibility that I would not know how to get otherwise.”

He is interested in exploring Codemotion’s new community platform offers a viable alternative to Meetup.

Codemotion recently launched a platform to help community organisers promote their events through our website. Take a look and find an event near you, promote your events, offer to speak at a meetup, or start something new.

Are you a Team Manager or a Servant?