Home » Articles » Stories » Don Eyles and the elegance of the universe: A talk with the man who coded the human race to the Moon
Stories 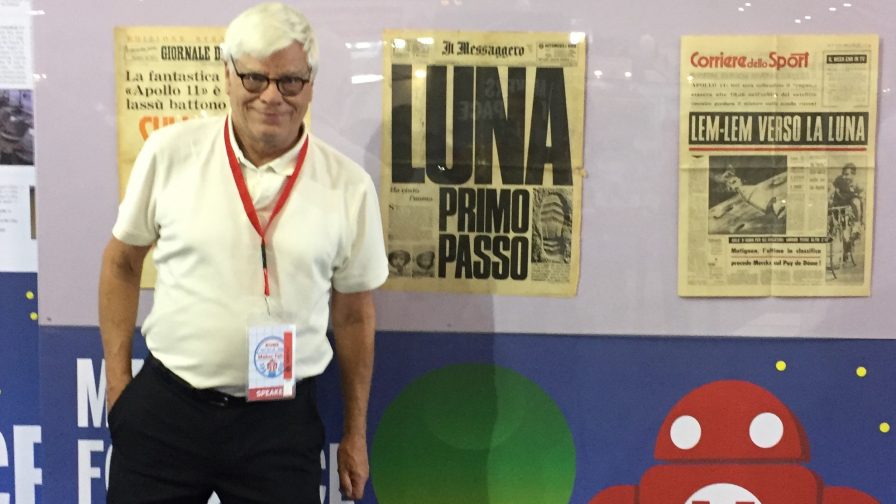 The Moon Landing is probably the most important achievement in human history. It was allowed by a complex technology and feeling that we still cannot replicate today, with our superior technology.
Many movies, books, and other media witness the importance of this result. One of these pieces of information is “Sunburst and Luminary”  the book written by Don Eyles, who was one of the programmers who wrote the code for the Lunar Module.
Codemotion had the chance to meet Don during his stay in Rome, Italy, as an invited speaker to the European Maker Faire 2018.

In his 20’s, this man played a decisive role at the beginning of the space exploration. I thought that the best title for this story was a mix of elegance and universe, exactly the title that Brian Greene gave to his fabulous book about the shape of the universe according to the string theory. We apologize to Green for borrowing his title for this story 🙂

Don Eyles studied mathematics at the university with his own focus. “I did not like calculus nor differential equations, but symbolic logic and linear equations, the basis for navigation in three-dimensional Newtonian space”.
He started programming when he was hired for the Apollo project. It was hard to take a course on computer programming in those days. “Starting from the books could seem hard, but it becomes easy as soon as you have a real task to accomplish”. Don joined the Apollo Project in the summer of 1966 and exactly three years later, on July 20th, 1969, the Lunar Module, powered by his code, landed on the Moon.

Compared to today’s gizmos, all space missions dealt with the extreme scarcity of resources. The LGC, Lunar Module Guidance Computer, had 2k words of r/w memory (15bits + 1 for error checking).
Computation time was also a severe limitation, that was what got in trouble the Apollo 11 mission.
A sneak circuit of the electronics surrounding the computer stole 13% of computing time. We could not afford it during the lunar landing when we only had a 10% margin. Fortunately, the software was written in such a way that it could withstand that condition”, what looks like a kind of fault tolerance ante litteram.

The role of the software developer looks greatly changed in time, but maybe it’s not. Today, developing software is pretty much the same as developing any project: you need to have ideas, to find out a way to get things done, and if they don’t, making them more reliable.

The chance of meeting Don was so fascinating that Codemotion shared it with some fellows of its rich multi-dimensional tech community.

Ray Holt, Designer of the first microprocessor and currently General Manager at Mississippi Robotics / Stem Advancements, already participated in other Codemotion’s activities. He was curious about how a young man could feel facing such a defy.

“I didn’t necessarily feel prepared for the job when I got it”, says Eyles. “There was something intimidating to be hired for this purpose. But the field of flight software was very new so my programming skills were not important”.

Marco Casolino, the Senior Researcher in INFN National Institute for Nuclear Physics and Professor of Space Instruments at University of Roma Tor Vergata (Master’s Degree in Physics), asked him details on the team size.

“I think the total number of team members was in the order of 300 people: half of those were analyzing, half were writing the code (very rough numbers). My own specialty was the Lunar Module and I believe there were 20 to 25 programmers in the team. We have to add to them what we called system engineers, whose code was in common with the Apollo software. The system software was written in large part when I joined”.

I did work with Margareth Hamilton. She was an extremely talented engineer and one of the most influential women in the area of code. There were other women making that work and she made a very large contribution.

Codemotion cares a lot about women and technology. One of our myths is Margaret Hamilton, so it’s a must for us to collect tiles of her life from who had the chance to meet her. Don is one of those fortunate people, and we are fortunate to put his experience at disposal of our broad community.

Jaya Baloo: Everything is quantum!

Meet Christian Heilmann, a living legend of the IT industry.