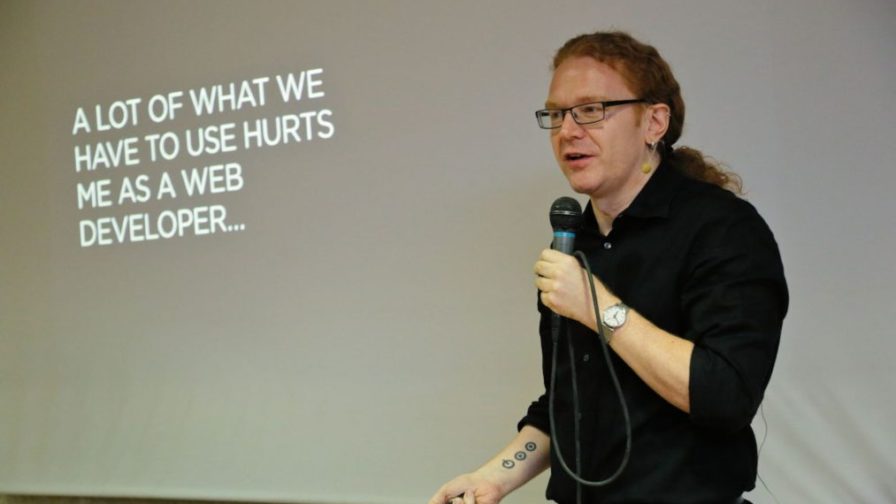 Christian Heilmann is a legend of the IT industry. After spending more than 20 years to make the web work and thrive at Yahoo, Mozilla and now in Microsoft, he is now considered one of the most influential technology advocates. He has written several books on JavaScript and the Developer Evangelism handbook.

Christian, you are well-renowned as one of the most influential advocates in the IT industry. When did you discover your aptitude and interest in IT and how did you develop this passion into a career?

I always loved computers as a kid. And then friends of mine got computers and computer games and I was really bad playing them, so I basically analysed the games to see how I could cheat!

It started to become a real career later on when I was a radio journalist and discovered the internet around 1996/97 and realised I could get information faster than my colleagues!

I left my job at the radio station and started building websites and teaching myself HTML and that’s when my career started – I got hired by a large company in Germany. I’ve always been fascinated by computers but I was never too excited about setting up a database in a perfect format, I was much more excited about building a human / computer interface with the technologies at hand.

You’ve written many books on JavaScript. As you said, JavaScript isn’t writing a few lines of code to make the web cooler, it’s about becoming a platform for development. What’s the actual potential of JavaScript these days?

It’s the fastest-growing language. It’s quite interesting because when I started using it, it was just toy language for doing special effects on the internet. Nowadays you can build every solution in JavaScript. That was interesting because the language itself was not architected to be that big; it was not the language that was meant for these kinds of things.

JavaScript grew so fast that everybody could play with it but we’re now at a place where so many things depend on it and we have to make sure we find a way to make it maintainable and actually make it understandable.

Straightforward thinking, Artificial Intelligence and Machine Learning are meant to be the next evolution of computing. How do you think they will be able to change the human/machine interaction?

I think the biggest problem with AI is the hype around it.
We’re at a stage where we’re at the Star Trek-level technologies. I think it’s great that people are not afraid of computers anymore. But on the other hand, I think it’s very dangerous the amount of information we’re giving away for free or unwillingly or unknowingly and we don’t know what people are doing with it or how long it gets retained. We need a lot more openness and transparency on where the information goes.
We need to make sure that AI helps the whole of humankind and not necessarily only a few people to get richer. It’s a given that AI will take over, or machine learning will take over the IT space and the world around us.

The JavaScript Community grew a lot in the last few years. What is the role of the community for a senior as well as a junior developer?

I think junior developers have a good opportunity right now to hit the ground running. Our tooling is so wonderful compared to when I started with JavaScript. You have editors that actually teach you how to write the language while you’re writing it, much like in Word when you write something wrong and you get a red squiggle under it. So for junior developers a very important thing is to embrace the technologies that we have out there and also become part of the community. There are so many opportunities to learn, rather than just buying a book and sitting by yourself.
For senior developers it’s the other way around. We need to be more open to new ideas junior developers. I always hire someone better than me – I want to learn from them as well so I can move on and they can take over my job.

What makes a conference attractive to you as a speaker?

I like the reaching out to people that I normally don’t reach. Getting feedback on how people use things that I’m producing or working with is a very important part for me. When people offer me money to speak I try instead to get them to offer free tickets to people who wouldn’t otherwise go to the event. Making sure you give back to the community is a very important thing.

What has been the biggest challenge you’ve faced in your career?

I think the biggest challenge was actually going when I needed to. It’s very common for developers to be in companies and be unhappy but stay. I’ve been at companies and felt grumpy and unhappy and that’s not productive to the rest of the company. Someone else will come in with a fresh approach and be happy to do that job.

What piece of advice would you give to a youngster who wants to become a developer?

Right now I would say the best thing is to look into machine learning. Machine learning is the next big thing. Take online courses, be social and contribute to Open Source projects. Take advantage of all the free stuff that is out there – it’s also the most up-to-date.

Christian Heilmann will deliver the Keynote Session at Codemotion Berlin 2018, talking about  Building human interfaces powered by AI. Join us on November 20 to 21 to meet him in person!

Luca Attias: the emergence of the digital divide