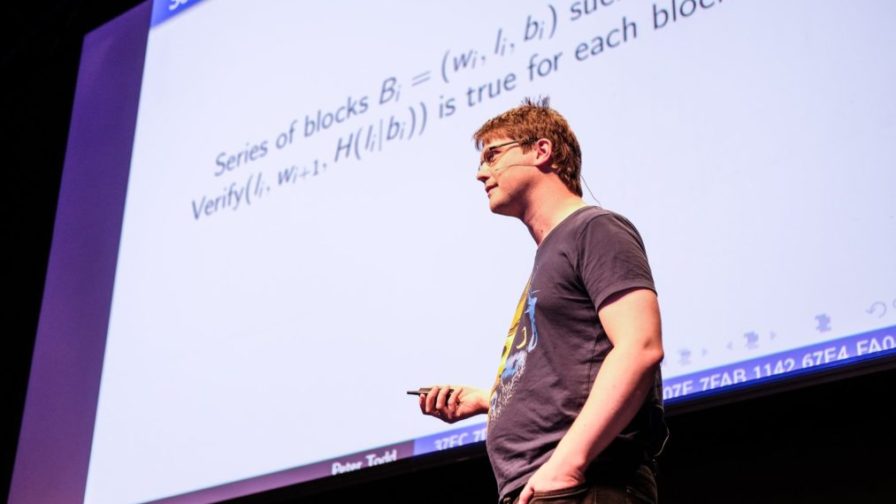 When we asked Peter Todd to introduce himself at Blockchain and Crypto Values Conference in Milan, he replied: “I help people to apply cryptography to their problems”.

Who is Peter Todd

Peter Todd is a well known and trusted Bitcoin Core developer and an applied cryptography consultant. He works on the basis of the most famous cryptocurrency and his attendance at the conference was about the scalability of Single-Use-Seals, a topic related to trust and consensus in blockchain world.

Single-use-seals in the cryptocurrencies world

Similar to the ones from the real world, single-use-seals are used in the cryptocurrencies’ world to secure shipping container and are needed in the blockchains to prevent double-spends. As is the physical world, in fact, cryptocurrency developers have to face frauds attempts, and double-spends are one of the most impactful in decentralized implementations. Missing a master central authority, Bitcoin uses instead consensus and proof of work to keep your transactions safe. Single-use-seals prevents two different people to provide two different versions of what should be the same data.

A lot of the hype will die, but the usage will increase

While it could appear a topic strictly related to mathematical functions and algorithms, single-use-seals in cryptocurrency have a huge impact on day by day issues: seals are the basic object in Bitcoin to prove you solvency or to trust your signatures. And, with a growth in popularity and usage all around the world, the implementation of those basic building blocks needs to be fully trustworthy and fully scalable.

Peter’s effort on Single-Use-Seals aims to provide an implementation that could provide the same or greater level of trust, but at the same using fewer resources, for example, reducing the number of bytes per year per token needed to prove the data. You need optimization when you deal with peaks of 400.000 transactions per day.

The binding between the “real world” and the really hyped and so abstract blockchain, was one of the topics of our interview with Peter Todd. In his opinion, in the future the most of hype about cryptocurrencies and blockchain will fade out, but the actual usage will increase.

The reason, said Peter, is because blockchain is actually a really simple data structure, and its simplicity makes it suitable for many and various fields of application. He expects more and more involvement of developers in the topics related to the blockchain, and not strictly to build a money-related product or service. When you need “trust”, the blockchain world can provide you with a proven and tested implementation.

Maybe people are tired hearing about crypto values and blockchain, but the solid foundations of those technologies are ready to make our world, physical and virtual, a little more affordable, block after block.

Douglas Crockford and his book “How JavaScript works”