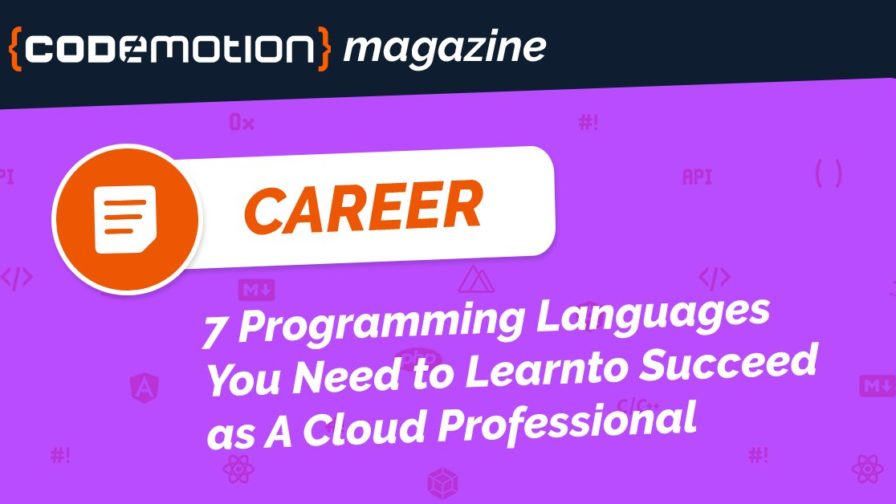 By now, almost every company in the world has moved its operations to the cloud. Companies that have embraced cloud technology are on the lookout for cloud engineers and other experts.

This has increased the demand for professionals who can build and maintain cloud infrastructure for these companies. But then, cloud computing jobs have proved challenging to get despite considerable demand.

Aspiring cloud professionals often lack skill sets that can make them optimal fits for these jobs. The biggest challenge for you, if you want to get a job as a cloud engineer, is picking and studying the most suitable programming languages for this specialty.

Python also comes with a wide range of features that make it worth learning. First is that it is one of the easiest languages that you can learn and use as a cloud developer. It is also free and has a vast global community that supports learners with essential insights.

Besides, cloud professionals aren’t limited in terms of what they can do with Python. You can use it to create operating systems, design applications, process images, backup and restore MySQL databases, etc. These are possible because of Python’s speed, community, open-source development, and productivity.

PHP is a popular language used by programmers for purposes such as website automation. It is easy to learn and manipulate, making it a perfect language for anyone looking to become a cloud professional. PHP is a top choice for many programmers because it helps create applications with dynamic elements.

It comes with great features such as the ability to run on UNIX and Windows servers. It is also worth mentioning PHP’s powerful output buffer feature that makes it popular. Its remarkable speed, low cost, reliability, and security are also other features that make it worth your attention.

Another great reason to learn PHP is that you can use it with several database management systems. You can connect it to MySQL and use it to manipulate the database, for instance, to backup MySQL database. Backing up databases can be tedious and time-consuming, but it gets easy with PHP.

Another widely used, general-purpose programming language is Java. This universal language has gained popularity because cloud professionals can use it for almost all programming tasks. It helps experts create applications for websites, mobile devices, desktops, etc., and support game development.

Like Python, Java is an easy to learn language making it excellent for programming beginners. One of its most robust features is reusability and a modular approach which makes writing codes easy. It is highly portable, thanks to its platform-independent nature that makes it movable between computer systems.

Java is non-complicated and worth every cloud programming beginner’s attention. Its scalability and security have also contributed to its wide usage by enterprise cloud applications. Java simplifies application development, and apps developed with it run flawlessly on various operating systems.

Golang, a programming language developed by Google, has also gained popularity among programmers. It is one of the easiest to use cloud development languages that every programmer needs to learn. It is used chiefly on Google Cloud (GCP) but also applicable on different cloud platforms.

Most enterprises that work on the cloud today are utilizing Golang. Its features, such as deep integration, libraries, authentication, etc., make it an excellent tool for these enterprises. Programmers choose it because it helps them build fast, secure, efficient, and scalable applications.

Golang has emerged as an alternative to some of the earliest programming languages. It has also proved to be faster than many languages and is worth learning for every cloud engineer.

Ruby is one of the most beginner-friendly programming languages today. It is easy to learn, master, and use mainly for creating web applications. This language has a vast ecosystem that consists of over 60,000 libraries with various tools and features that simplify application development.

This open-sourced language comes with a variety of great features. Good security and high functionality are examples of features that make it worth every programmer’s attention. Besides, it has a wide variety of learning resources for beginners and an active and supportive community.

The most crucial benefit of using Ruby is that it requires programmers to write less code than many other languages. It is also easy to integrate features such as cloud monitoring, logging, error reporting, trace, etc., in applications developed using this language.

ASP.NET is a popular language developed for programmers by Microsoft. It has a design that helps users develop dynamic and robust web applications with many essential functions. ASP.NET, like many languages on this list, is easy to learn and comes with many other beneficial features.

For instance, it is language-independent and comes with functions that simplify monitoring and management. Programming professionals can use it to create applications that can run on all cloud platforms. Besides, applications built with this language are modern, fast, and scalable.

Being an open-source language, ASP.NET is one of the cheapest to use. Its massive community makes it easy to learn as a beginner as they offer help where necessary.

Programmers can also connect ASP.NET with a database management system of their choice.

MySQL is one of the most common database management systems used with ASP.NET.

Integrating the two can help you effortlessly backup and restore MySQL database. The simplicity of ASP.NET and the other features discussed above make it an important language to learn.

C++ is worth learning if you intend to become a cloud engineer in the future. It is a programming language that helps professionals create high-performance applications. It also focuses on helping cloud engineers program the cloud to function in specific ways.

This language gives programmers optimal control over systems. It is also a cross-platform language making it one of the most used by programmers worldwide. C++ is one of the easiest languages that you can learn if you want to become a cloud expert.

It is also easy to use C++ with MySQL for various purposes. Integrating it with any other database besides MySQL is also simple, which is one reason it is popular. You can easily switch from Java to C++ and vice versa if you already know either language as they are close in various ways.

Cloud technology has gained pace in today’s technology-driven world. There are various skills that you need to learn when looking to become a cloud engineer. For instance, every aspiring cloud professional needs to learn some form of programming language to succeed.

We have already looked into the top 7 programming languages that are worth learning. Knowing at least one of them can make it easy for you to design and execute different applications.

Besides, it can help you learn how to use other critical cloud technologies such as backup services efficiently.

How to Manage Multisystem Interaction Consistency with AWS Step Functions

Do You Design Your Career As You Do for Your Software?