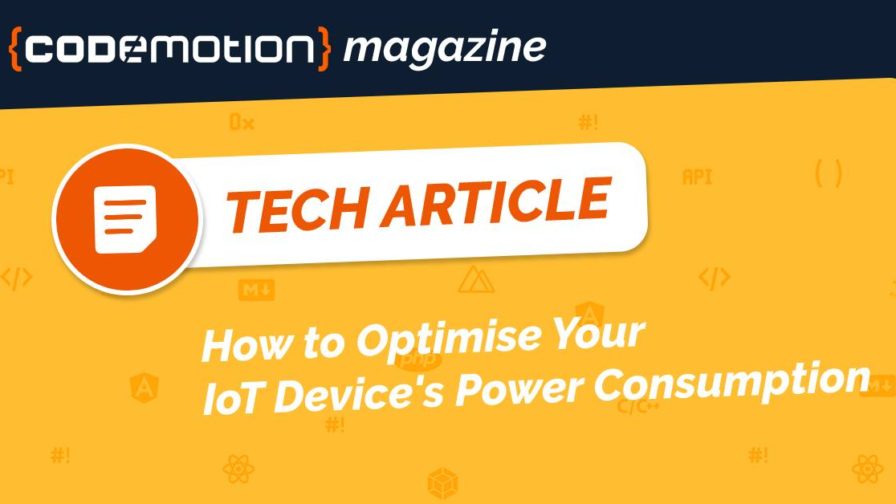 Long battery life is a frequent concern of people purchasing Internet of Things (IoT) products — especially those for remote or harsh environments. That’s an understandable concern. Excessive power consumption could negatively impact the user experience and the device’s intended purpose.

Some of the IoT devices for which long battery life is exceptionally crucial include those used in industries such as:

Prioritizing power optimization during development is crucial for ensuring the device performs as intended. As a developer, your decisions could play a vital role in helping the battery last longer. Here are some valuable tips to consider.

According to some estimates, sleep modes make IoT devices consume up to 90% less energy while idle.

Thus, as a developer, you may build an IoT device to go into sleep mode after a specified time. If they do, that’s a smart step towards optimizing power consumption.

Deep sleep mode provides the most significant energy efficiency of the three. It also works well for cases where the product must send information periodically before returning to sleep.

When you and your team consider creating sleep-mode functionality, keep the user in mind. For example, ensure it’s easy for them to activate or deactivate it. Also, test to verify it does not take too long for the device to go into active mode following sleep.

French brothers Jacques and Pierre Curie realized that pressure applied to quartz or some crystals generated an electric charge. One of the most common examples of piezoelectric energy harvesting involves special insoles that charge people’s mobile devices. Those are not mainstream gadgets, but they show what’s possible.

Researchers in Singapore recently developed a new piezoelectric material reportedly 40 times more flexible than competing materials. They believe their achievement could lead to better energy harvesting, including in wearable IoT devices. The material is also electrostrictive, changing shape with applications of electric current. That property makes the innovation potentially suitable for sensors and actuators, too.

If you’re working on IoT wearables, specifically, don’t overlook that people generate static electricity while moving. That form of potential energy could harm sensitive electronic components if left unaddressed. One approach is to refer to the human-body model. It’s the most common resource for determining an electronic device’s susceptibility to electrostatic discharge (ESD).

ESD also becomes concerning during shipping. However, people commonly choose anti-static packing materials to address it. These options prevent the buildup of static electricity. Products include stretch film, bags, and tubing, which people use to wrap IoT devices for shipment.

Many people appreciate the convenience of push notifications. However, they often notice that these negatively affect power consumption. These alerts give users useful information, including:

From an IoT device perspective, push notifications can tell people about things such as:

The process for setting up your IoT app to send push notifications involves several steps.

The user must accept the prompt to receive push notifications when signing up for the app. However, it’s usually possible for people to adjust whether they receive all of an app’s alerts or only the most urgent ones.

Consider designing an IoT device that allows people to turn off all push notifications or customize which ones they receive. From a power optimization perspective, the better approach is to give users a way to retrieve information as needed and have push notifications only warn them of potentially dangerous or unwanted events.

For example, a sensor on a refrigerator might connect to an app that warns people of the door left ajar. However, it might not give alerts if the refrigerator’s temperature drops by two degrees while remaining within the acceptable range.

Choose when and how the IoT device transfers information

First, bear in mind that IoT devices’ embedded radios consume comparatively more power than their computation and memory-related components. Thus, keeping the radio turned off as much as possible positively affects a device’s power consumption.

Researchers are learning more about how using a wake-up radio could ensure prompt transmission without draining a battery. That concept involves a radio transceiver containing the primary radio and a low-power radio that only wakes up when it senses incoming data.

This approach allows a longer sleep duration for the device without negatively affecting performance. Plus, it enables IoT batteries to last for years rather than months.

However, there are strategic things you can do regarding software functionality, as well. Begin by setting event-based rules. For example, an IoT security camera in an entryway may only transmit data if a facility’s door opens.

Alternatively, an IoT sensor connected to an industrial machine may send data hourly, but only when the equipment is in an active mode.

Determine what constitutes non-critical data, too. You could have such information transferred at a lower rate to save energy. Relatedly, compress large files, such as those containing video data, before transmission occurs. If possible, tell users how each data transmission setting affects battery life. You could do that by giving them estimated lifespans for each one.

Sources indicate that IoT spending could exceed $1.1 trillion by 2022. It’s no surprise that people interested in IoT engineering often see the industry as a lucrative one that could provide them with decades of profitable work.

One of the best ways for IoT development professionals to build well-performing devices is to explore how device features affect power usage and the associated trade-offs with each one.

For example, if a wearable device has a colour display screen, it will likely use more power than one that only shows data in black and white.

However, power-saving choices like that one might interfere with positive user experiences. Your team may decide it’s not worth it to reduce power consumption and simultaneously detract from enjoyment or performance.

As you weigh the specifics of features and battery life, consider creating a power budget. That’s a table showing the relative energy cost for each system operation. One easy and practical method is to add each IoT device feature as a power budget line item.

Non-essential functionality then becomes more evident, allowing you to eliminate whatever compromises too much power.

Select the most appropriate Wireless Protocol

Picking the proper wireless protocol is another crucial aspect of power consumption optimization. When evaluating them for your needs, ensure that a protocol you may use also matches a client’s requirements, such as those related to data transmission.

Bluetooth Low Energy (BLE), Zigbee, and Thread are some of the standard wireless protocols you may consider to minimize power usage.

Most Developers commonly choose BLE for battery-powered IoT devices that need short-to-medium communication ranges. However, BTE has a medium data transfer rate. That characteristic makes it ill-suited for sending large amounts of data or devices that frequently exchange information.

Also, the Low Power Wide Area Network (LPWAN) protocol offers a range of up to 15 kilometres. Moreover, it can give IoT devices battery life lasting at least ten years. That protocol’s extensive coverage capabilities make it an appropriate choice for harsh environments or those with high industrial noise levels.

The main thing to remember about wireless protocols is that power optimization is not your sole concern. You can prioritize it, but don’t ignore other factors related to how, when, or why customers will use the IoT device.

Power optimization for IoT devices requires a systematic approach. As a developer, you must never forget that efforts to reduce energy usage could cause undesirable performance outcomes in other aspects of the device.