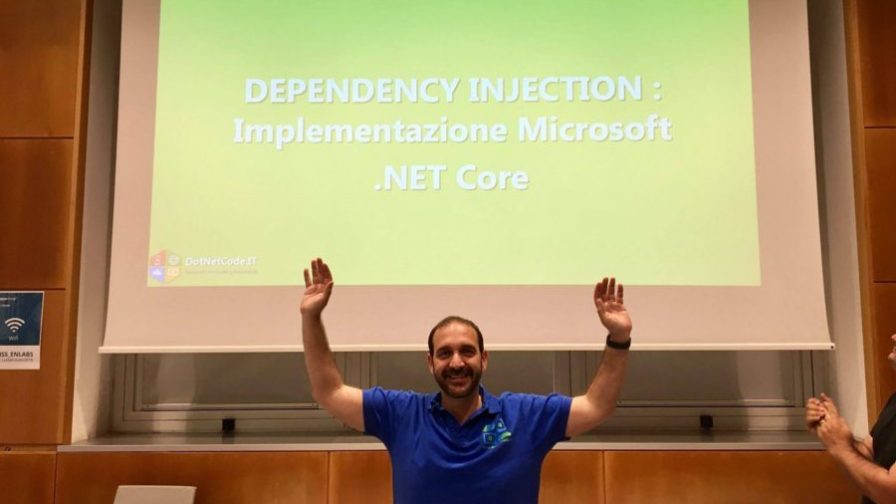 Hello Luca. Let’s take a deep dive into ASP.NET Core SPA. Could you tell us something more about its advantages? Does it have any downsides and would you recommend it?

We’ve had several meetups and we followed a thread on .ASP Net Core, the latest technology developed by Microsoft, in which they took the old DotNet frame and rewrote it completely. This has brought enormous benefits because the new platform is much lighter, better performing, ready for the Cloud, but what’s really important is that it’s an open source technology.

A revolution in the Microsoft world – the idea of having Microsoft open source software was, until a few years ago, unthinkable. During the talk I spoke about SPA (Single Page Application) technology that’s used to create high performance web applications using another client-side framework (for example Angular or React). We used.ASP Net Core on the back-end, then on the front-end side we used an Angular frame written by Google in collaboration with Microsoft. This is another project in open source because it’s written in TypeScript. The technology’s constantly evolving, it’s definitely got a future and will definitely have one straight away, because it’s now an open source cross-platform. Everyone uses it, and with it being a cross between front-end like Angular and back-end in DotNet, there’s lots to have fun with and play around with.

Why did you decide to talk about this specific topic? Do you think you will prepare another presentation on this topic in the near future?

I gave this talk because I’m a web developer and I’m interested in what goes on on the web, so Angular and Single Page Applications are an important part of web applications. When someone organises a session, they try to make it about what they’re interested in. It’s difficult to create a session about something that doesn’t interest you personally. We will do more talks on .ASP Net Core because there’s so much to see and learn.

Let’s leave ASP.NET Core for now. We would like to know what you think about tech communities. Do you think that it’s important for a developer to participate in events such as AperiTechs and conferences?

Participating in events and meetups such as AperiTech are one of the most wonderful and interesting opportunities that a developer can have. As a community leader, I’m often asked if we only organise our events in Rome. The great thing about the meetups is that we really seek interaction between those doing the session and those participating, we learn new things and meet new people. It’s like having a chat among friends where you share your knowledge.

We couldn’t agree more. For those who don’t know you Luca, tell us something about yourself!

I work as a Solution Architect at Almaviva, and I’m the community leader of DotNetCode, a Microsoft community that deals with everything revolving around software developed on the DotNet platform. One of the reasons that led me to create the community and organise the meetups, apart from the willingness to share and help other developers who have less experience than me (I’ve been working for about 20 years), was to reduce the gap that exists between the US and Italy. When something comes out in America, it doesn’t arrive in Italy for at least another six months. That’s why we try to keep the developers up-to-date on technologies as they come out. As for my education, I graduated from high school and then enrolled in a mathematics faculty, although I didn’t complete my studies. The exams I took at university helped broaden my mind, and have also been useful to me in the workplace. I really like cooking, photography and cycling, but the truth is that my passion is in developing code. I always say I’m lucky because my job is my passion. I started at the age of eight when my father bought me the Commodore 64 and since then I haven’t stopped.

Do you think you could ever change your job?

I could never change it: I’m the happiest person in the world, I do what I like! Absolutely not! I’m very happy with my work, and especially working for this new company which gives me the opportunity to work on big projects where we’re challenged, because they’re important things, and that’s the beauty of it: we face new problems with new clients. This is very stimulating for me.

Could you share with us how you manage to keep yourself up-to-date? Are webinars, conferences and meetups important?

I organise the meetups and often I’m the speaker. Specifically, I read articles on the internet and keep up-to-date with everything related to documentation. I try to follow social networks, because on Twitter and Facebook you receive a lot of information and articles and shares. It’s not easy because there’s a lot of information, but once you’ve identified the relevant people, it gets easier to follow the updates.