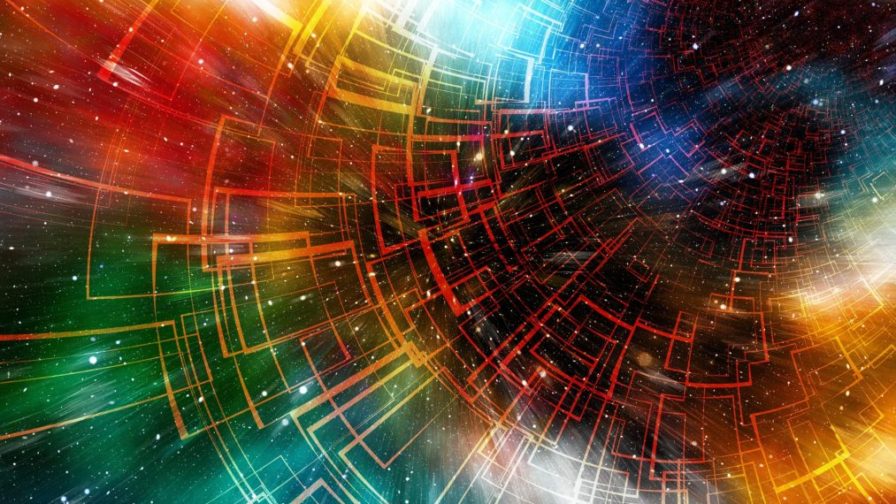 The Lightning Network is a path to improve Blockchain’s speed capabilities. One of the networking meetings proposed by Codemotion is the Aperitech event. At Codemotion Rome 2019, the event structure was different than usual, due to time constraints and food/drinks delivery.

The blockchain experts were BEN’s Emiliano Palermo and Chainside’s Simone Bronzini and the main subject was obviously the Lightning Network. We’ll describe the BEN at the end of this article. Let’s ignite the Lightning, now! 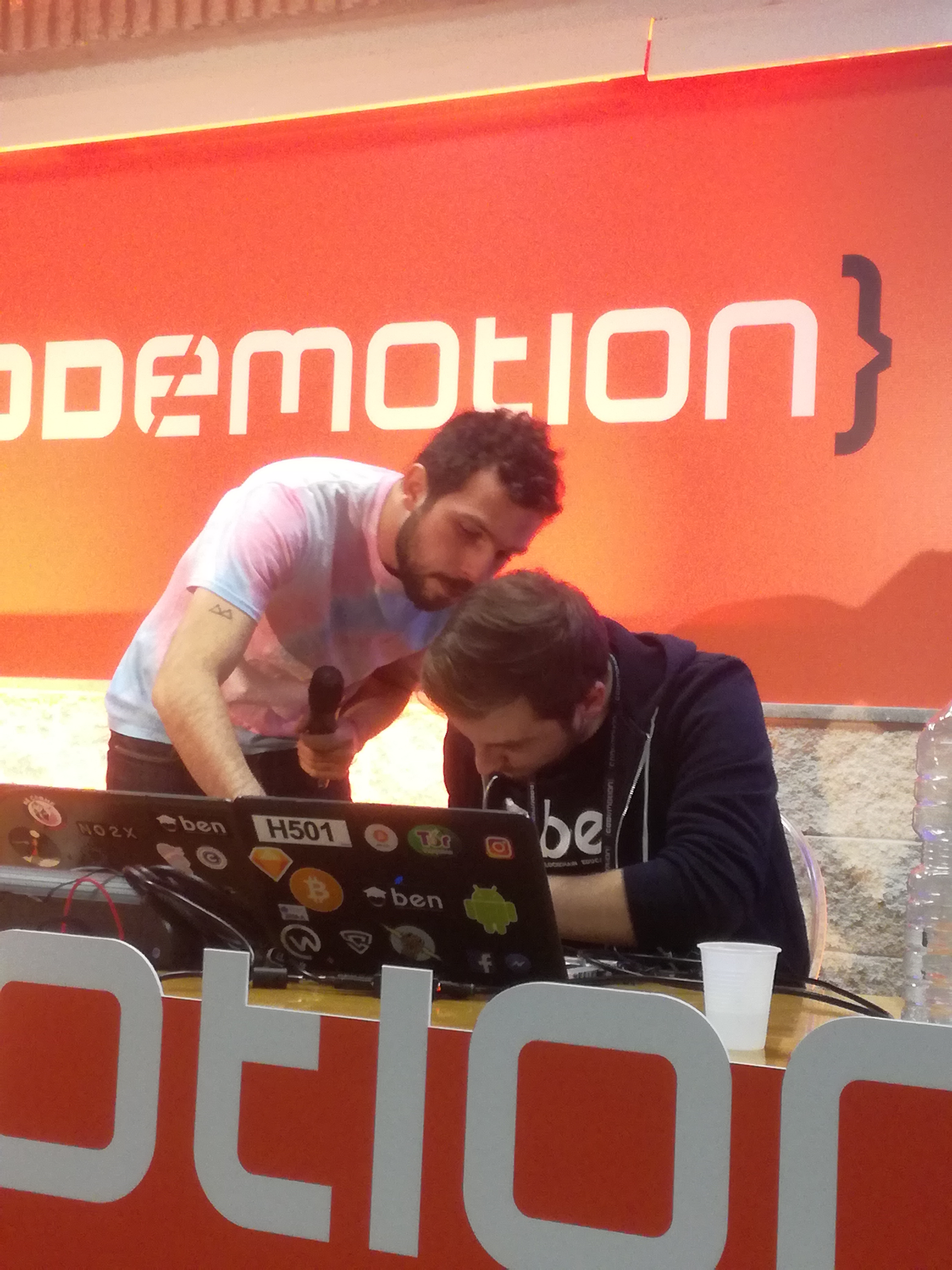 Let’s take one step back, introducing several major issues that occurred to different blockchain systems in the last few years. Simone gave a deep insight into it at Codemotion Milan 2018; more on this subject can be found in Weaknesses of Blockchain applications by Gabriella Giordano.

Summing it up, three main factors contribute to the security of a blockchain: its length, the number of entities that share and build the chain, and the way the chain is assembled.

The length of a blockchain is relevant in terms of security, because of the bond that ties one block to the next, making it very difficult to apply even the slightest change to the sequence. What’s more, a higher number of nodes makes the blockchain endurable to DDOS (Distributed Denial Of Service) attacks.

Some other points of failure reside in calculation overflows, bugs in the interpreter software and blockchain management. A full category apart collects all issues related to the Turing-completeness of the languages used to define smart contracts.

This was the subject of the talk Simone gave at Codemotion Rome 2019, “From seven to 7,000 transactions per second: leveraging the power of Bitcoin scripting to scale.”

Blockchain transactional capabilities are slow indeed. You need to perform better if you want to compete in the market. Accelerating the chain’s speed can be achieved in many ways. Among them, increasing the size of each block is largely treated in the technical literature.

That’s why a first proposal was to increase the block size. The 1MB dimension solves one block at an average time of 10 minutes, i.e. 600 seconds. Any block, as an average, stores 2,000 transactions. Taking into account all the process steps to be completed, the final average time is 7-9 tps, transactions per second. This is to be compared to the typical figure provided by Visa, reporting 20,000 transactions per second. (That figure, however, is not a real-life value, but was achieved in a lab test)

An increase in the size of each block will surely achieve a larger tps value. At the same time, it will lead to some major disadvantages, such as the delay in the validation time, a higher risk of forks and net instability. 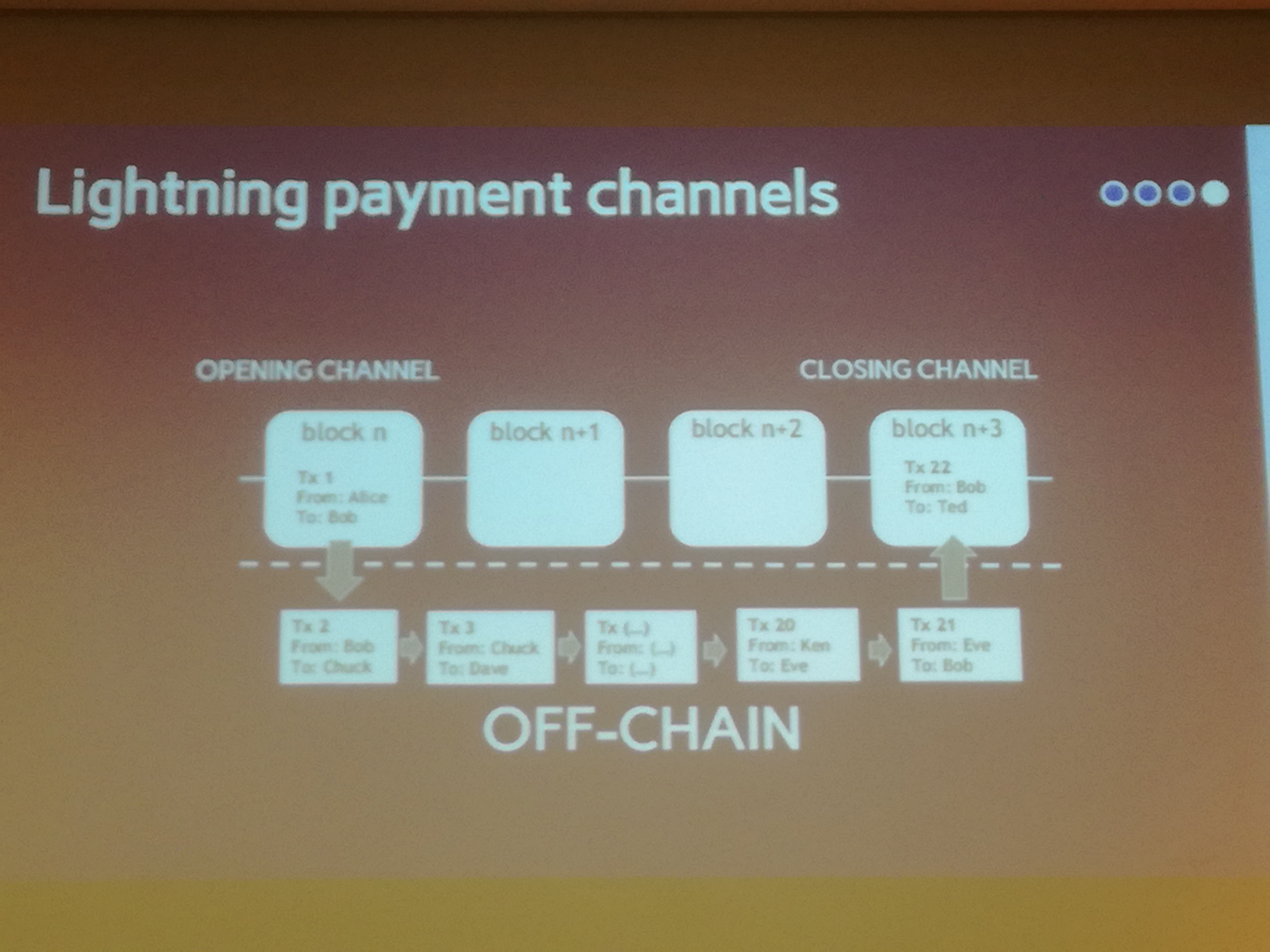 The Lightning Network sets up a new communication, based on “channels”. A channel is a communication path between two users. The communication can be either direct, that is from A to B, or indirect, from A to B and then from B to C (as many steps as you want).
The two users who want to exchange money need to open a channel. A private transaction is then started, with the money held at the same time by both participants. They have to confirm the transaction in a specified time: who fails, looses all the conferred money.

The multidisciplinary strength of the Blockchain Education Network

The Blockchain Education Network is the co-organiser of these Aperitech meetups about the blockchain technology. This network has been briefly introduced to the audience by Emiliano Palermo, VP and co-founder of the Italian branch.

The BEN was born at the beginning of 2014 from the union of the “Bitcoin Club” of Stanford, MIT and University of Michigan. Its scope is to inform and train students about the potential of cryptocurrencies and the technology behind Bitcoin. Since 2014, the network has expanded in all continents to over 150 universities from the United States to the Philippines via Kenya and Europe.

The BEN landed in Italy in December 2014 and the Blockchain Education Network Italy was born. It rapidly expanded in many Italian cities. The management of BEN Italy is a totally independent organisation, but it is closely linked and in constant contact with the international network.

The Network brings together teachers, researchers and students from all over Italy. The goal of the network is dissemination, education and research on the blockchain topic. The strength of the network is given by the multidisciplinary origins of their members, who come from economic, legal and ICT-related departments.
In addition to the academic and university environment, BEN also has contact with public administrations such as the Lazio region and the Municipality of Naples. More projects are in the pipeline.

Aperitech, the convivial side of the community-making process

A very interesting communication approach is the informal meeting called Aperitech. It gives all developer communities a common place where to meet at a scheduled pace, thus increasing both internal and external awareness and networking. It is managed by Codemotion’s Innocenzo Sansone in Rome, currently at the stunning pace of about 20 Aperitech meetings per month.

One of these recurrent events is about blockchain, managed by BEN. This organisation is also supported by Codemotion at other major events, such as Codemotion Milan.

The what, why and how of Javascript functional programming

How to stay human in the era of artificial intelligence