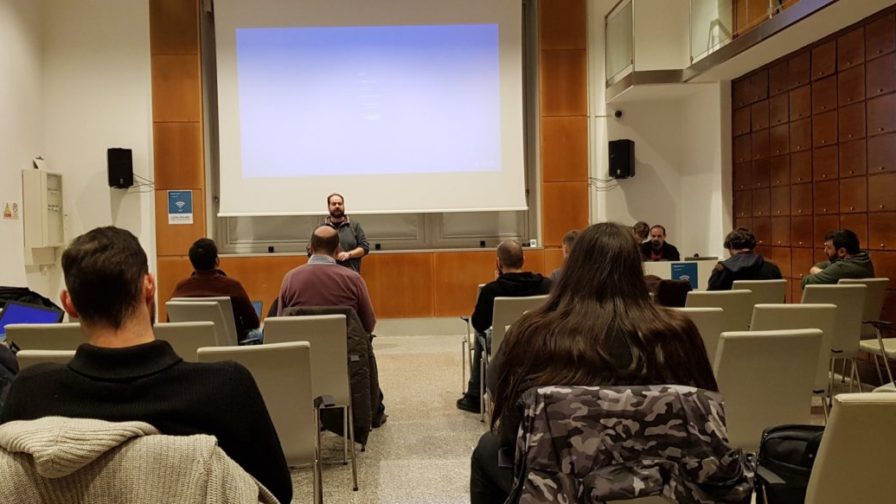 Hello Federica, we know that you collaborate closely with Claudio D’Alicandro, the founder of the Elixir Roma community. One of the results of your collaboration is the talk you presented at one of the #Aperitech meetups “Functional programming: what is it and why should I care?”. Could you tell us about it?

I must say that it was the first opportunity for me to collaborate with Claudio D’Alicandro. We wanted to prepare some kind of introduction to the functional paradigm. The talk was divided into two parts: I illustrated some basic concepts related to JavaScript, which everyone can understand, while Claudio gave a small introduction to Elixir itself and Elm, a pure functional language for the development of front-end applications.

I remember that the audience was especially struck and shocked by the error management of the two worlds we were illustrating. It was a great evening. I ended up collaborating with Claudio for Elixir Roma, and a few months later I prepared a talk with Enrico Risa that we delivered at Codemotion Rome. On that occasion, my part of the talk was dedicated to Elixir.

Could you tell us why one should learn the Elixir programming language and take an interest in Elixir?

Elixir comes from an interesting ecosystem. It’s a very productive programming language and relies on a very powerful framework called OTP. OTP was created for concurrent and distributed computation and overcomes many limitations of the old computing models. These days, when scale out is particularly in demand, it’s an ecosystem worth keeping an eye on.

Do you think Elixir can be a substitute for another functional programming language?

Yes, sure. I think it can be very interesting for those coming from the Java world. I’ve worked on Java, and the experience in Elixir is more significant. Java is rapidly evolving towards the actor model now that there’s Akka, but Akka is just an attempt to replicate OTP within the Java Virtual Machine, which suffers from its limitations. The Elixir virtual machine was created to support OTP. A Java programmer who moves to Elixir may find that it’s got much more than JVM/Java/Akka can currently offer. And then Elixir is itself functional!

How did you get interested in this functional paradigm?

Thanks to this functional paradigm, I was able to achieve what I was doing more quickly. And what I created was less prone to error, more readable, in a nutshell: better. Companies should start being interested in the functional, because it has higher returns on equal investment and there are many engineers around who are already familiar with it and who are eager for a change of paradigm. The functional can be lean, so why not?

Last but not least… for those who don’t know you, tell us something about yourself!

I’m a senior web developer and I work at AdEspresso by Hootsuite. Last year I founded Rome‘s community for the functional paradigm, Lambda Roma, which was immediately supported by AperiTech. I had some experience with some functional programming languages… it was really interesting to be able to share it with other devs. I’ve met many important people through the AperiTech project.

WTF it works in Dev Environment