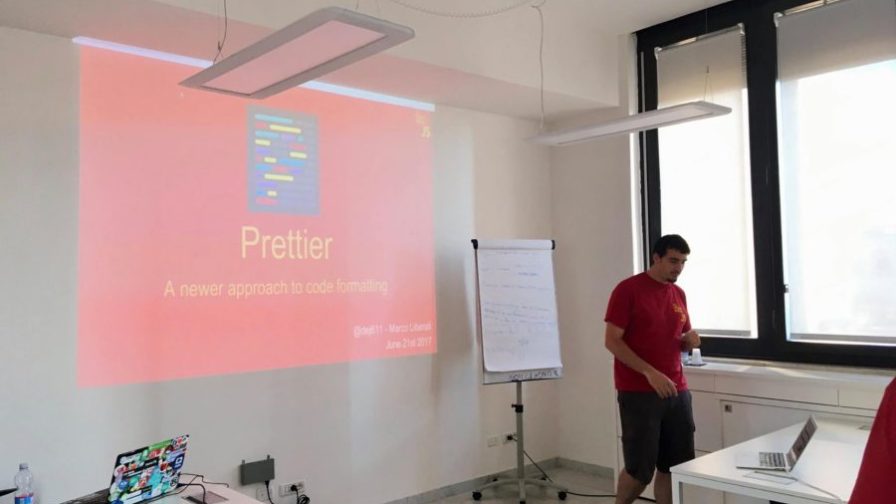 Hello Marco. You’re an active member of many tech communities in Rome. First of all, let’s take a deep dive into Graph Analytics. Could you tell us more about it?

Of course! The basic idea is very simple. We’ve decided to collect all the data from the AperiTech community in Rome. By data I mean the community itself, community events, people who attend the various topics. We threw everything into a cauldron that itself had the structure of a graph. This was a shared talk with another speaker, Enrico Risa, and our idea was: let’s try to model the AperiTech community, with a series of people participating in events, and try to extract the patterns. The talk is mainly based on analytical trend extractions from the collected data. No manipulations of any kind have been made, what has been done is simply information retrieval.

Graphs lend themselves as a structure to doing certain types of analysis, which structures like traditional tables and databases don’t allow us to do because of problems with both performance and structure. So our talk was mainly focused on extracting this analytics that can then also be used in the field of Machine Learning. Navigating on a structure like a graph lets you pull out information, which conversely would be much more challenging and more expensive to do with tables. This was the purpose of the talk. To give a starting point for a different approach.

Speaking of graphs, does this tool have any drawbacks or only advantages? What do you think about it?

As with everything, there are pros and cons. It has very specific use cases, which is worth considering. I think about managing a telecommunications infrastructure, I think about the concept of anti-fraud, I think about the discourse on recommendation engines in which you don’t simply see user-product, but you have to browse a lot of information collected on a path of relationships.

If we go with more classic cases, then of course more tried and tested solutions can be of more benefit than a graph-database. This doesn’t mean that hybrid solutions can’t be used. In the event that a database doesn’t work well, it can be combined with something that works better; nothing prevents you from using both and making up for what’s missing.

You mentioned that you divided this talk into two parts together with Enrico. But coming back to the very beginning, why did you decide to talk about graphs and bring the talk to one of AperiTech meetups?

This talk originated from a request because as coordinators of Graph Roma, we tried to conduct a survey to understand which use cases could be fun to tackle in order to explain the concept of graph databases. And out of that came this proposal to analyse the AperiTech community‘s data, both because it’s more accessible as a topic – it’s something that everyone understands, they already have an idea of what it is – and because it’s an Enterprise topic. You don’t have to work in the field of cybersecurity to understand it, or in the field of anti-fraud or infrastructure – it’s a fairly generic field that can represent basic concepts for the utilisation of a tool. It’s interesting to find out how to build a recommendation engine, and the one that applies to the AperiTech community can also be extracted from other fields. Then I liked finding out from the meetup organisers how the groups I help were going, so why not take advantage of this to have an overview of the various meetups?!

Do you think this topic needs to be explored with further meetings and more meetups to discuss it further?

Yes, we’re thinking of a talk to take it forward in a way that is also useful for the user, which is not just a talk but something more in the future, either adding a new topic or building something concrete.

So we guess that you will do talks on similar themes in the future, right?

Why not! I would also like to see, like any meetup organiser, someone else speaking on this topic. It makes me happy when a subject’s interesting and is used as a starting point. Me or someone else, why not?!

Last but not least, could you tell us something about yourself?

My name is Marco Liberati and I’m a member of two AperiTech communities: one is RomaJS, the other one is Rust Roma, recently founded by me and two other guys, with the aim of spreading knowledge about connected data in the Rome area. In RomaJS, on the other hand, I became part of something that already existed; I try to help as much as possible by giving talks or finding speakers. I deal with web development, in particular front-end. I specialise in “data visualisation”, taking data and making it usable in a visual way for the people who have to work with it. Both the analyst and end user. I did this abroad for many years and, on returning to Italy, I wanted to bring all this to Rome too. I also attend other meetups such as Machine Learning meetups, for example, they already existed and I decided to participate, but only as an attendee.