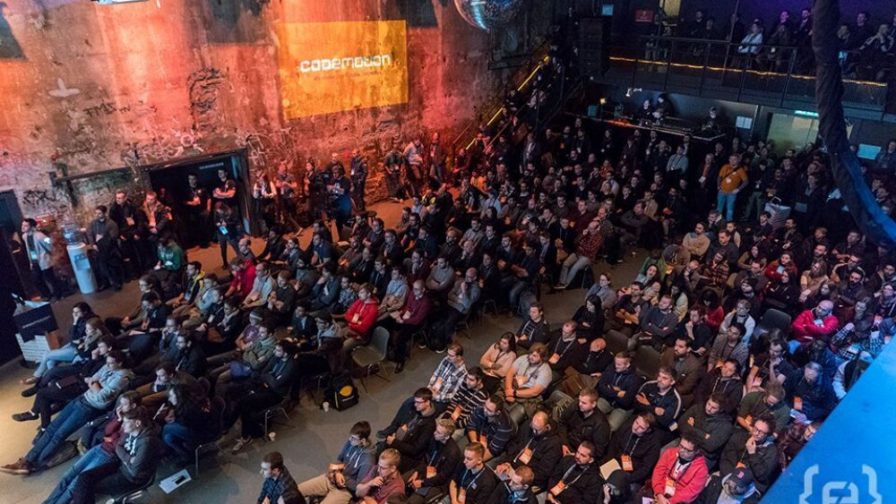 At Codemotion Berlin 2019, we welcomed over 1200 participants back to the Berlin Kulturbrauerei for a two-day event with six parallel tracks encompassing 16 topics including  DevOps, GameDev, Front-end, Cloud, Cybersecurity, Serverless, Software Architecture, AR/MR/VR, Design, UX, and career development in IT.

Talks were plentiful and generated plenty of discussion during the conference and the breaks. Here’s just a snapshot at what some of the speakers had to say:

Use your own product: Scott Chacon

Former GitHub founder and CEO founder of language learning platform Chatterbug Scott Chacon joined us to share his insights as an “accidental entrepreneur” answering the question “What would you take and apply to a new company and what would you leave behind?” He shared Github journey from a side project employing 4 people in 2008 to a team of 400 in 2016. He explained:

“A company is a different company every time it doubles in size. GitHub was 8 companies, it really had a different feel.”

Scott offered a number of critical insights. He advises founders to:

“ Use your own product – I see a lot of people build something that they don’t want to use themselves but they think there’s a market for it.” At GitHub even finance and legal teams used Git. At Chatterbug, every team member is learning a language, “We’re a language learning company, everyone at the company should be learning a language from every level all of the time”

He also demonstrated a real-life UI in customer service, walking the audience through his efforts to use Twitter’s help function. We learnt why he hates no-reply emails and his advice:

Meetup’s Jake Levine shared “I am a lazy engineer” and offered a highly amusing talk where he shared his four principles of laziness. He asserts it’s behaviour more about deliberate tasks, focus and efficiency rather than mindless efforts, explained “

“Lazy engineer isn’t ignoring the future, we’re actually trying to optimize for the future” giving us an example of Disney animators who use the same animation frames in different successful movies.

“Do fewer things at once, keep code changes small and isolated. Work on one at a time, you will get people to review your code, no problem. You will be able to identify the cause of breaks and fix things in much less time.” and shared the great merits of infrastructure as code.”

What does the future of the web look like? You’ll have to watch the talk for all of the  predictions, but just a few highlights:

Richard Feldman, Head of Technology at NoRedInk Richard dryly showcased a future where:

“Typescript is gong to talk over the javascript world in a way that we’ve never seen before.”

He shared his earlier failure as a visionary who “chose a boring technology called Pearl. This decision didn’t age well, there was a slight decline in interest…”

Richard detailed the merits of Closure script.org, reasonml,github.io and  elm-lang.org But ultimately predicts that “JS alternatives are going to stay niche, and age well.”

Richard also took us through the failing of NPM including the notorious  the event-stream malicious package, suggesting that “By 2020 at least one new NPM security incident makes the headlines.”

Lena Reinhard, Director of Engineering at CircleCI gave a thoughtful talk about leadership and team-building remote teams: She promotes psychological safety explaining what it means

“everyone having equal opportunities to contribute and being able to do their best work.”

She shares a number of great strategies for remote team building including greeting people according in their timezones, creating survey getting to know your documents, and feedback sheets for people to detail their preferred methods for receiving feedback. She also espouses the value of slack as a team tool, including the creation of a gratitude channel to publicly compliment team members for a job well done.

Lena warns companies against a hero culture, a workplace where one person is championed as the only person who can solve difficult problems noting, “It’s a structural image and no individual should be tasked with fixing that structure”

“We earn trust not through grand gestures but through small pile sized gestures.”

Pink Floyd fans will be familiar with the term “Welcome to the Machine”. Jet Brains Developer Advocate Hadi Hariri took us on a chilling journey where

“Social media in turn relies on us to feed it with information, be it of our surroundings or our personal information. It’s become somewhat of a self-sustaining self-serving machine in which we’re all part of.”

From genealogy search services which include the ability to locate family members’ homes on google maps and unearth if they are registered sex offenders, to the application form for an ESTA visa to visit the US asking for your GitHub and twitter, Hadi showed us the reality of technology. He painted a picture of a society of personalised advertising, people as the product and a world where the technology we’ve created to make our lives easier ultimately is used against us to the highest bidder.

“We need to consider the accountability of code, have data checks,  have objectivity in transparency of algorithms. We need to try to make use of ethics in technology and this isn’t just about going and doing a course on ethics, this is about our own principles, our own ethics, our own morality as companies.”

This is just a few of our many speakers, all of whom gave highly engaging presentations to packed to capacity rooms. Take a look at the videos on our YouTube Channel, and visit Slideshare for the accompanying slides. We can’t wait for next year’s conference!

Codemotion Milan 2019: How You Can Start and Progress Your Developer Career