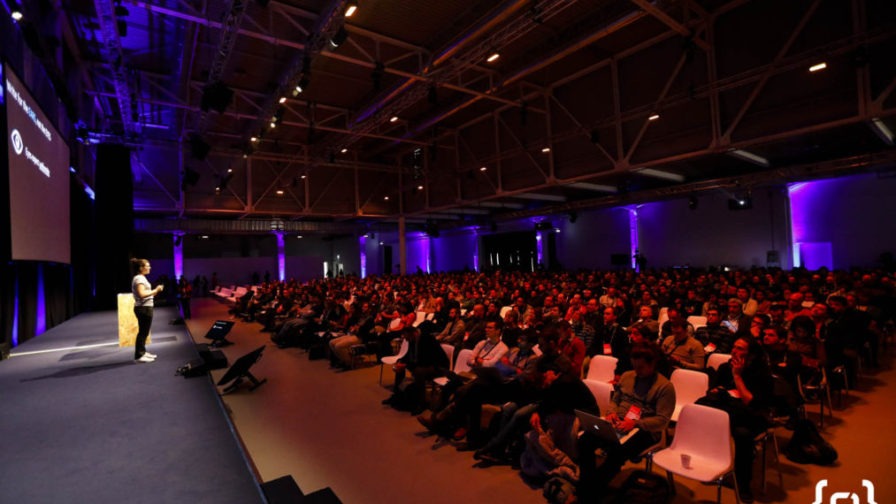 Robots, Virtual reality, Companies, and industry experts drew more than 2500 people to Codemotion Milan 2018 from November 29 to 30!
Some big names joined the Conference during the last two days including John and Brenda Romero, Ashi Krishnan, Bruce Lawson, Faisal Abid, Gabriele Lana and representative from leading tech companies such as Cisco Devnet, IBM, Amazon Alexa, Google Cloud, Microsoft Azure, Bending Spoons, Salesforce, A2A and many others.
The first day was ignited by the incredible speech of John Romero who brought us back in time to the early ‘90, taking a quick voyage through the milestones in the gamedev environments and characters such as SuperMario, to Doom, Quake, and Hexen.
About Doom, in the afternoon, John accepted the challenge of 2 lucky attendees, who played with him in the Doom deathmatch! He won, of course, but it was nevertheless great fun to see the creator of this iconic game in action!

“The warmth of the attendees shows that the world of tech is no longer a niche area for a few people, but is a pivotal asset for every company devoted to innovation.”
Chiara Russo – Ceo and Co-founder of Codemotion

This was followed by a more serious tone in the CTO meeting, in which Mario Martinelli – CIO at Sisal, Dario Brignone – Founder & CTO at Satispay, Marco Cupidi – former CTO Subito.it, Director of Engineering at Schibsted Media Group and Alwin Schauer – Vice-president EMEA at Salesforce Platform discussed about the evolution of the CTO’s role in the Digital Transformation era.

Attendees enjoyed an enormous diversity of topics: Frontend/Javascript, Cybersecurity, DevOps, MachineLearning/DeepLearning, Blockchain, Bidgata, Gamdev, just to name a few, this technical sessions run parallel with a more inspirational focus.
Brenda Romero for instance presented her considerations on diversity in tech – and how to improve it – while the outstanding keynote of Ashi Krishnan from GitHub, in the day 2, made us reflect upon the living things and our responsibility as creators.

The interactive nature of the talks, which took place across eight rooms at Milan’s Superstudio venue, with many questions being taken afterwards, encouraged dialogue between each speaker and his/her audience. This flowed into spontaneous discussions outside the sessions, as well as during the many networking meetups at the end of the first day, inspiring and engaging a range of communities.

At Codemotion we’re incredibly proud to be linked to 90 communities, which are the beating heart of our organisation, and it seemed entirely appropriate that we would give them ample space and focus during our conference.

After an intriguing two days, which has involved exploring new discoveries and processes in tech, while also looking back through its history, people from all sorts of backgrounds and a wide variety of expertise in different specialisms were left feeling proud and motivated. This was perfectly summed up at the conference’s closing keynote speech by CleanCode ‘Software Craftsman’ Gabriele Lana, who spoke poignantly about his “journey of becoming the programmer of my dreams, the obstacles I’ve faced and the strategies that I’ve applied to overcome them”.

Gabriele said: “I proudly call myself ‘Software Craftsman’. I began to love this profession as a child at the end of the ‘80s and these feelings never left me since then. I have more than 20 years of professional experience. After all those years I came to the conclusion that I still have many things to learn, but it’s ok, because I love programming like 30 years ago.”

It is this pride in our work, our support of each other and the ways in which we are constantly learning, evolving and adapting, that has united the thousands of people who attended and contributed to Codemotion Milan.

A massive thank you to all our amazing speakers, sponsors, staff and, of course, every single person who attended the conference. We absolutely could not do it without you and it is a privilege to spend these days with you all.

“The warmth of the attendees shows that the world of tech is no longer a niche area for a few people, but is a pivotal asset for every company devoted to innovation.”