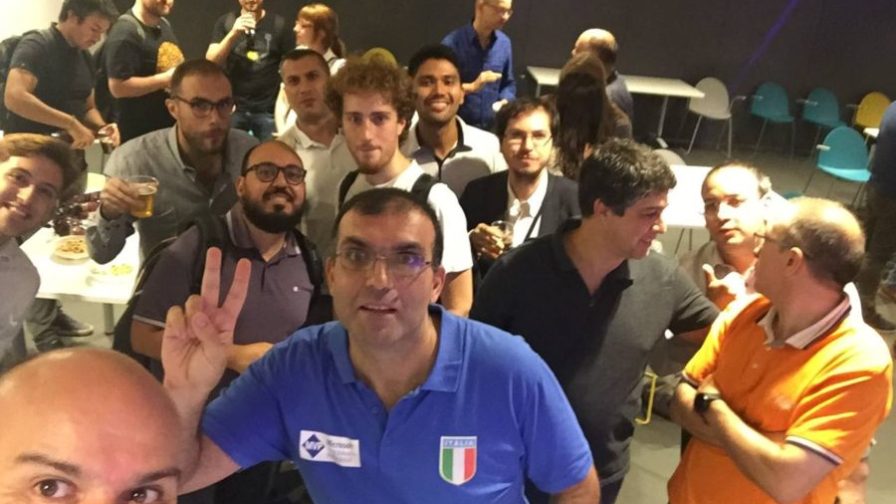 Hello Alessio. During one of our #AperiTech meetups, you presented a talk on a very interesting topic: the Bot. Could you tell us about that?

In this talk, being more focused on Microsoft technologies, we talked about the toolkit for bot development that Microsoft makes available and that enables you to create bots through C#, which then run on most platforms, such as Skype, Telegram and Facebook – without making a different bot for every single platform.

Furthermore, to do something more interesting, I introduced cognitive services in the talk, which are related to the Microsoft technology that lets you do image recognition training.

Who can use this technology?

Today, all frameworks are very easy to use, you just need to master the basic concepts, namely web API, REST calls, asynchronous, database, etc. Anyway, with a little study, you can do everything. For those who want to further explore the creation of this platform, there is the registration of AperiTech talk online on the YouTube dotNET{podcast}, plus on the Internet, there is a lot of documentation, just look for “bot framework”.

Let’s get back to the start. The idea for your talk, where did it come from?

I heard about it and I was really interested in this topic. I had seen lots of online services using it, so I started studying it and later I also started sharing it with others. I haven’t included this bot technology in my work yet, but I’m trying to include it in some projects that I would like to carry out for customers. I think the topic is one of the hot topics of today. Also in our work, I think we need to have a basic knowledge of all the technologies that are available, so we know what we can use.

Thanks for sharing all this important information with us. Now, for those who don’t already know you, could you tell us something more about yourself?

My name is Alessio Iafrate, I’m from L’Aquila. I’m a freelance developer, so I work for myself and for private customers that I have all around Italy. I started programming at a very young age. I always liked it and, fortunately, it became my job for 20 years. I even forced my parents to buy me my first computer.

My passions are programming and family, I have two children and the third one is on the way. And precisely because programming is a passion of mine, I had the idea of founding a community, dotNetAbruzzo, which, as the name suggests, is based in Abruzzo, where we try to share our technical knowledge as much as possible.

The choice of working as a freelancer, where did that come from? Which languages do you use at work?

It came about more or less by accident. I initially worked for companies, then I needed to move because my wife worked in Mantua. Then I came back to Abruzzo. For a period I also stayed in Rome, then I began to get little jobs on my own and I decided to do it all as a profession. When it comes to languages that I use, I am very attached to the dotNET world, so Microsoft, and I mainly use C# which now allows you to have web extension, desktop, mobile, 3D viewers, practically everything. I also use JavaScript and angular for the web part.

In order to become a programmer, what was your study path?

As far as programming is concerned, I learned everything on my own. I graduated as an accountant with top marks, then I did a course in electronic engineering for a couple of years because in Abruzzo, computer science did not exist as a course. Then I switched to computer science but, in the meantime, I started working and in the end, I didn’t graduate.

You’re working as a freelancer, so we guess that it is also crucial for you to keep yourself updated on the latest technologies. How do you do that?

First of all, as I always learn everything on my own, I learn a lot from the Internet.

I always look for new topics, news. Additionally, I’ve been discovering the world of communities for some years now. Before I went to Rome I was attending many events and conferences that kept me updated and then I decided to found a community here in Abruzzo, thanks to which I became Microsoft MVP, a recognition given by Microsoft for those who stand out in community life.

Our work is about being constantly updated and if we stop doing it for four or five months we risk of falling behind. So, in my opinion, the role of communities is very significant and it is important to follow as many events as possible, not only dedicated to the topics that you are interested in. Attend these events, above all, for the opportunity to network with others and share your ideas with them.