Home » Backend » What is Reactive Programming and How Can I Benefit from It?
Backend 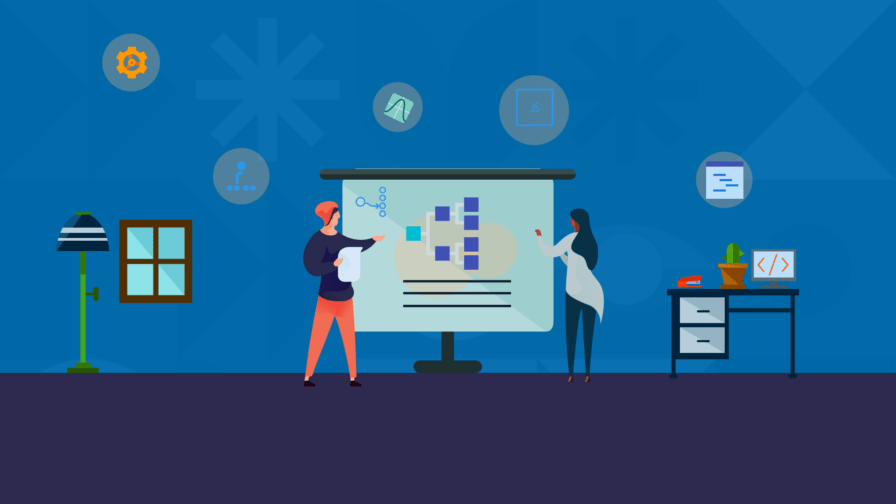 Reactive programming is a design approach that uses asynchronous programming logic to handle real-time adjustments to typically static information. It provides an efficient mechanism — the use of automated data streams — for handling content modifications in response to user inquiries.

How Does Reactive Programming Work

The fundamental concept of reactive programming is streams, which are time-ordered sequences of connected event notifications. Generally, a stream will begin with an observer, either a code section within an application that monitors for application-related conditions or a device, such as an IoT sensor, that generates an event. A stream is sometimes depicted as an arrow flowing left to right from the observer process to one or more handlers until it is completely processed, terminated in an incorrect state, or branches into derivative streams. Reactive programming is about constructing the observers and handlers and threading the stream as necessary.

Device-generated streams are easy to comprehend. However, streams generated by observers embedded in the software are a little more complicated. Typically, these components act in conjunction with an application’s processing or run periodically to monitor a database element. When this software element detects a condition, an event is generated in the stream.

The handlers guide a message stream, where work is routed to a specific next process, or by a message bus, such as an enterprise service bus or message queue, which transports the message to designated bus listeners. The message handling process determines whether a message is broadcast to several handlers or a single handler. It is typically also responsible for load balancing between multiple concurrent handlers or for providing backup handlers in the event of a failure.

Each handler must either forward the message, identify when the stream operation has completed, “eat” the message or raise an error. The handler may “fork” the message into multiple streams or create a new stream or streams. These fork conditions are frequently used to decouple jobs in message handling; for example, a message may create both a local response for opening a gate and a message to a transaction processing system.

Let’s explain some of the differences between two key concepts: Reactive Programming and Reactive Streams.

Reactive programming uses declarative code to create asynchronous processing pipelines. In other words, it’s programming with asynchronous data streams that transmits data to a consumer as it becomes available, allowing developers to design code that responds quickly and asynchronously.

In reactive programming, data streams are continuous or near-continuous collections of digital signals. These data streams are generated in response to a trigger from a source such as a motion sensor, temperature gauge, or product inventory database.

Reactive programming is made up of three key points;

Observable. The term “observable” refers to data streams. Observables contain data that can be transmitted between threads. Depending on their setups, they generate data on a periodic or one-time basis. Several operators can assist an observer in emitting specific data in response to specific occurrences. They handle data processing and distribution to other components.

Observers. Observers ingest the observable’s data stream. Observers subscribe to the observable using the subscribeOn() method to get the data it emits. When an observable emits data, it is passed to all registered observers via the onNext() callback. They can do various tasks here, such as parsing the JSON response or altering the user interface. If an observable throws an error, the observer receives it in onError ().

Schedulers. Remember that Rx is designed for asynchronous programming and requires a thread management system. This is when scheduling comes into play. Schedulers are the component in Rx that determines which thread observables and observers should run on. You can use the observeOn() method to specify which thread to observe. Additionally, you can use scheduleOn() to determine which thread the observable should run on. RxJava includes several default threads, such as schedulers. newThread() to create a new thread in the background. The code will be executed on the IO thread via Schedulers.io().

Reactive programming enables the creation of software that reacts to events rather than soliciting user input. An event is only a notification that something has occurred. It is widely understood that events are “real-time” signals generated concurrently with the condition they signify and must also be handled in real-time. These events are best seen as “streams” that can flow through numerous processing elements, be halted and handled en route, or fork and generate parallel processing activity. Because most of this processing is time-sensitive, it necessitates a distinct programming approach, which is how reactive programming was born.

Reactive programming and the reactive systems it deals with are composed of a mixture of “observer” and “handler” functions. The former recognises critical conditions or changes and generates signals to indicate their occurrence, whereas the latter effectively handle those messages. Because there is no control over the number or timing of events in reactive programming, the software must be durable and highly scalable to manage unpredictable loads.

Reactive stream is an initiative focused on unifying reactive extensions and addressing asynchronous stream processing with non-blocking backpressure. It involves work on both runtime environments and network protocols. The org.reactive streams APIs were initially developed in 2015 and consist of four interfaces: Publisher, Subscriber, Subscription, and Processor. These interfaces are implemented by the extension frameworks RxJava, Reactor, and Akka Streams.

Java developers sought to make the JDK’s APIs for reactive streams available without the need for third-party libraries. JDK9 added reactive streams interfaces to the java.util.concurrent to accommodate these needs. The flow package is semantically equal to the org.reactive streams APIs. RxJava, Reactor, and Akka Streams are all implementations of the Flow interfaces.

The APIs for Reactive Streams are as follows:

If a subscriber’s capacity is limited to four items, it will communicate this limitation using subscription.request (4). Unless the Subscriber asks more, the Publisher will send no more than four. When an item is published, the Publisher runs onNext(); otherwise, onComplete() is invoked.

There are numerous compelling reasons to adopt reactive programming as a business or developer. Here are some of the most significant ones to consider:

While reactive programming is an excellent tool for developers, it does present a few difficulties:

Is Reactive Programming the Future?

Businesses are increasingly utilising reactive programming. The concept of going reactive is not new, dating back to the 1970s. However, it is only in the last few years that new tools and technologies have enabled developers to transform the concept into reality by efficiently combining complicated activities. The modern web’s future is reactive in light of multicore, blockchain, cloud and mobile architectures. Business behemoths such as Netflix, Slack, Microsoft, and Facebook have already begun powering themselves reactively, with many more enterprises following suit.

The majority of modern programs are reactive in that they respond to events as they occur and do calculations in response. Thus, users strengthen their relationship with the system and improve their interaction. More accurate answers can be acquired more rapidly.

Additionally, when reactive programs evolve, they become more resilient. Even when an error occurs, the system remains available. The system is not destroyed if it becomes overloaded. As a result, reactive programming is compatible with most current needs.

Discover more about Reactive Programming in the video below!

Is It Always Best to Reduce Code Lines?

Save the Date for the 2nd Edition of Codemotion Devs Book Club!