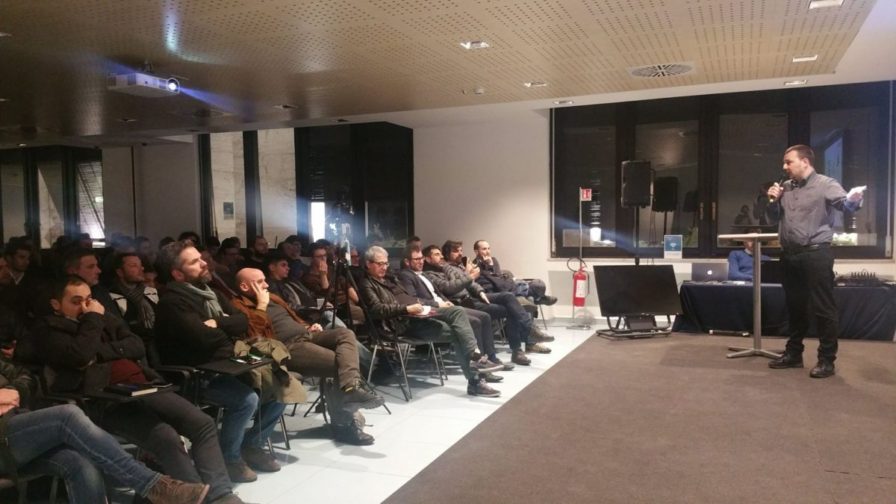 Hello Umberto. You are the co-founder of the Blockchain Education Network in Italy and you recently gave a talk on how to become a Bitcoiner. We wanted to ask you to share with us what you spoke about during your talk, as the word Bitcoin has recently aroused a lot of interest.

The talk was a sort of guide for those who wanted to know more about these issues. In the talk, I summarised in 10 points the important things you need before approaching this world and I also tried to debunk some myths regarding concepts that are often poorly described by the media. The media talks about Bitcoins, saying that they’re victims of hacker attacks or that they’re used to demand ransoms. In reality, hacker attacks happen to sites that deal with Bitcoin payments.

Did you get any feedback from those who came to see your talk? Were people interested in your talk?

I’d say yes – in the networking phase there was considerable interest and requests for further information on some points. Although I knew the talk was aimed at those who already knew about technology, I couldn’t know each individual participant’s level.

Are you going to deliver more talks to dive deep into the areas of Bitcoin and Blockchain?

As far as it’s compatible with my official work, I’ll gladly give other talks of this kind: I’ve done several, and not all with the same content.

Let’s get back to the world of Bitcoin. What do you think about the future of this technology?

It’s a technology that has a future, it will evolve with I don’t know how many competitors. Up until now, the prospective competitors have proposed new features or improving existing ones. But in this case, Bitcoin developers can integrate. I think it’s the future and, in my opinion, the competitors will remain niche because Bitcoin has the advantage of being the first to involve Blockchain technology.

Could you recommend us some portals for exploring the issues related to this technology, especially for those that are just entering this world?

It’s difficult to answer this question because it’s a complicated topic. It’s also necessary to differentiate between the groups that talk about Bitcoin as a means of investment and those that talk about future developments in Bitcoin technology; from those who aim to improve the protocol, to those who think of Blockchain as a stand-alone technology.

There are groups with different philosophies that indoctrinate the people who join them. So I wouldn’t have a group to suggest, also because often those which have been around for years split up due to internal divergences, giving life to new subgroups. We have to understand why there’s interest: if you embrace libertarian philosophy, to move your money around in total freedom; those who instead find the technology safe and stimulating, those who do the developing and share the mechanisms. There are also those who come to it because they want to use it as an innovative means of payment, those who want to set aside Bitcoin as a store of value or even those who want to speculate. Identifying a group with all these possibilities is difficult because “factions of thought” are created. A good alternative is the Blockchain Education Network group, because it tackles all the points of view: signups are accepted from all backgrounds (legal, economic, technological); it’s a group reserved mainly for students, so this is the only constraint.

My advice is that given by the majority of experts in the field, that is to start from the “Paper of Satoshi Nakamoto”: you can only start from the first words of the one who brought this technology into the world. From there you can study in-depth with consolidated means, through those who’ve known the area for some time or various books (for example Mastering Bitcoin by Andreas M. Antonopoulos). Although they might seem difficult steps to start with, I don’t see any other way, because then you risk reading news from newspapers or blogs that have limited and low quality knowledge and getting stuck going in the wrong direction. And if there’s a little bit of inclination towards developing computer science, it’s even better.

Last but not least, for those who haven’t had a chance to meet you in person, tell us something about yourself.

I’m a software developer and I currently dedicate myself to the front-end. I’ve had this role for about three years, but I’ve always been keen on computer science. I graduated in computer science and then I followed the natural direction of my studies: pursuing a career as a programmer. My interests, aside from computer science, are always linked to technology and progress, applicable to applications.

I’ve known about Bitcoin since its inception. In 2005 I developed a site and then a forum dealing with electronic money. I’ve developed an application called QuiBitCoin which reviews all the shops where Bitcoin is accepted. I’ve also founded an association for proper sharing of Blockchain technology.

Practical guide to the evaluation of an ICO