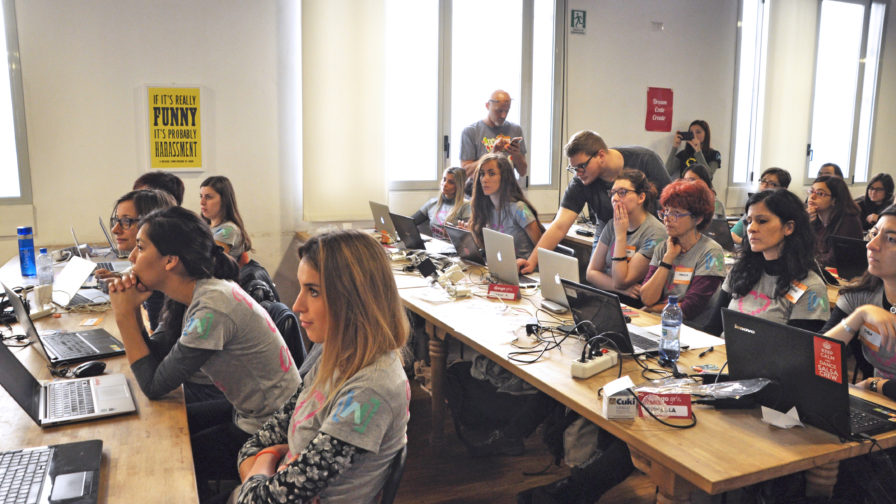 Fiorella de Luca is community leader of the PyRoma community. She began as a participant and later coach and organizer for the Italian Django Girls community. She also took part in the Google Summer of Code 2017 with the OpenWISP community, and was a Mentor of Google Code-in 2017.

The event is organized by Python Italia, a non-profit organization whose purpose is the spread of Python throughout the Italian territory.

Hi Fiorella! Please tell us about your tech community, its members and objectives.

PyRoma is a technological community that aims to spread the Python programming language on the Italian territory. The community is supported by the no-profit association Python Italia that every year organises PyCon Italia, the largest Italian conference on Python which today has more than 700 participants.

Django Girls is a community founded in Berlin in 2014 by women developers with the support of the entire Django community. In Italy, Django Girls is also supported by the non-profit association FuzzyBrains.

We are a community of developers who are trying to introduce more diversity into the world of programming. We believe that more diversity within technological workplaces generates positive benefits, more interchange of ideas and a more stimulating environment in which to grow. We organize free workshops to teach women how to build a site with Django and Python starting from the basics.

Being a Tech Community Manager

I must say that I did not become PyRoma community manager for work but more for passion.

It would be a beautiful profession that could help a lot in the working and social world but unfortunately in Italy the figure of community manager is not seen as a professional figure. Hopefully things will change!

Italy is rich in technological communities and important conferences. A lot of value is being given to technological development and the sharing of skills. There are vertical conferences that deal with a single language or framework and then there are conferences like Codemotion that try to embrace multiple languages and every novelty in the technology sector.

What were the biggest problems you’ve had to overcome and how have you done this?

Every day is a challenge can always arise small problems just find the way to solve them quietly.  Perhaps the biggest problem was to try not to take some criticism and controversy of some people personally. I’m still trying not to feel bad.

Do you encourage Diversity in your tech community, and during your meetups? How important is it to have a code of conduct? Have you ever had to apply it?

Yes, absolutely. I care a lot about this and I think there is really a lot of need to talk about this topic. I always hope to have managed to organize inclusive events and never to offend anyone. In our events we always try to bring some history related to the importance of diversity both in the world of work and social.

It’s essential to have a code of conduct in your community so that every person who joins the group knows what are the basic rules to respect.

Fortunately, no, and I hope I never have to apply it.

Why and how to become a Community Manager

It wasn’t really my choice to become a community manager. I attended the Django Girls Florence workshop in April 2016 as a participant and it was a great experience. Let’s just say that I have held various roles within the Django Girls community. I started out as a participant and was later offered to be a coach. After the various beautiful workshops I attended as a coach, I wanted to organize one in Rome. Mine was more a path within the community until becoming community manager.

In the same event, Django Girls Florence, I got in touch with the association Python Italia, since the workshop was held within their conference. Later in 2017 I took over as community manager of PyRoma.

I’ve received a lot from these communities and I’ve found some very good friends with whom I’ve had great relationships. I had the opportunity to get involved, to grow both professionally and personally, and to be a speaker at some events. The best thing is the opportunity to compare yourself with other people, exchange ideas and collaborate together.

I believe that the fundamental thing of a community are the people so the most important skill for a community manager is the ability to understand them.

One must be able to accept constructive criticism and be open to new ideas.

Compare with your community every day and involve them in the organization.

Above all, I think it is very important to make people understand how valuable it is to be able to learn from others and share their knowledge.

The secret to building relationships in a technology community is to make sure there is always food, beer and drinks!

What not to do:

PyRoma: the success of a tech community

What do you consider the best metrics for evaluating the success of a tech community?

The best metrics for evaluating the success of a community are always the people, if they interact with each other within events and outside means that something is being done. At least this is what I’ve done so far in PyRoma.

What are the most important tools of the trade, for you?

On an organizational level, the tools I found most useful are Trello and Slack.

What books, articles, videos, experts and conferences would you suggest to other tech community managers?

There are many articles by Alessio Fattorini that I find interesting and important. I’m lucky because I met Alfredo Morresi and I often ask him for some advice. I found it fundamental for my growth to have participated in the meetings of the Italian Community Managers where you have the opportunity to deal with a lot of community managers also from other sectors.

During Codemotion there is the possibility to confront each other thanks to the events that are organized internally with other experts in the field.

Do you think tech communities can have a role in shaping a better tomorrow?

Yes, tech communities can play a role in shaping a better tomorrow. They are based on sharing and accepting any person regardless of gender, nationality and background.

What advice do you wish you had been given when you started your community?

I wish I had been told that you can’t be always the only one who helps.

When to Quit a Technology Job You Just Started

Bootcamps won’t make you a coder: Here’s what will