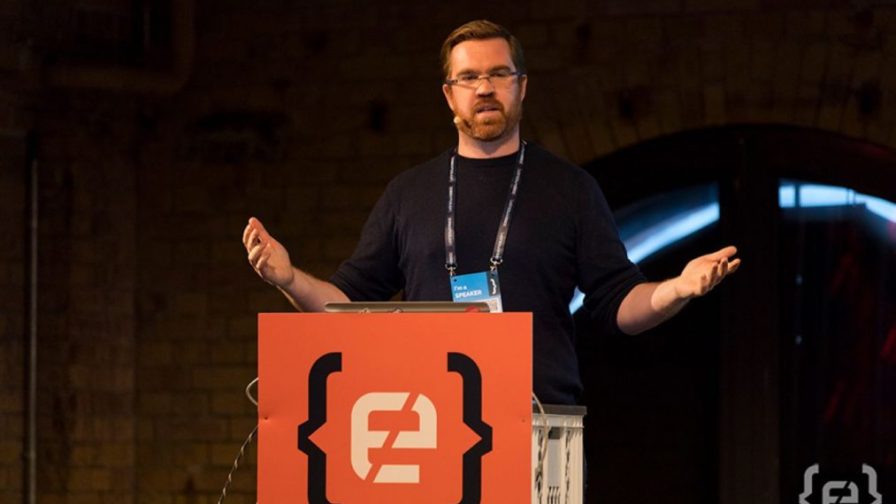 As the Open Source lead at online retail giant Zalando, Codemotion Berlin speaker Paul Adams leads a team responsible for developing and stewarding company policy and strategy. Although he lives and works in Berlin, we caught up with him as he returned to his birthplace of Scotland.

It was as a teenager living here in the Scottish countryside that Paul started coding for the very first time – mainly out of frustration with the exceptionally slow dial-up internet that plagued rural Britain during the nineties.

Programming done well is a team sport. I played rugby at school and, for me, programming was no different from playing rugby – if you wanted to do well you had to work well with the team

“I noticed there was a handful of websites that I was visiting which were particularly slow, even more than usual, and I found by digging through the source code of these websites that they were often being hosted by a particular technology. When I dug around some more, I discovered that these websites, or the technology that was hosting these websites, was something you could play with – you could see the code and you could edit that code and you could help make things better. So my first introduction to programming and to Open Source as a concept all happened at roughly the same time,” says Paul.

After studying as an undergraduate in pure software engineering, Paul went on to do a PhD in software engineering, specifically on the topic of productivity inside Open Source projects. Which all sounds very clever and technical. But Paul says he was motivated mainly by curiosity – and the desire to break things.

“I’d always had an interest in learning how things work. Computer software was just a particular example of this. I was just as excited to know how cars work or how a radio works. Software was just another thing that I wanted to understand. Essentially I wanted to break things apart, find out how they worked, then put them back together again,” he says.

Programmers don’t tend to have a reputation as gregarious team players amongst non-techies. But for Paul, the social aspect of programming was what drove him – and what made him successful.

His interests now lie off the rugby field, in art, photography and jazz. But Paul remains steadfast in his belief in the importance of teamwork and social skills. He does, however, have a confession for us.

Any programmer that’s ever worked with me will testify that I am terrible! I’m the world’s worst programmer. In terms of software engineering, that’s not what I bring to the table. I can write not terrible code, but no one should pay me to write code!

“Historically I worked on a project called KDE for over 10 years but never wrote a single line of code for them. My role there was more community guidance and shepherding. My day job doesn’t really involve programming. I lead programmers but I don’t get the opportunity to do it myself. I always say programmers don’t get paid to programme, programmers get paid to think. The sitting down at a keyboard and tapping away is just a consequence of the thinking, that’s not actually what you get paid to do.”

Paul says that the biggest challenge in his career was accepting that his soft skills were his greatest strength and a valuable asset.

“Going through this mental leap that what you bring to the table is your soft skills can be a struggle. For me, embracing the fact that the technology side for me was that I could do it but I wasn’t great at it was one of the best lessons I learned.”

Although considered an expert in his field, Paul’s ambition is a simple one: to be happy.

“I always had a singular focus on doing things that I enjoyed. I just always had a strong feeling that if I wasn’t enjoying something I’m probably not going to be any good, whatever the output is. I always ask myself am I doing the best thing I could be doing right now? Am I enjoying what I’m doing? I moved around a little bit to optimise happiness and therefore output. Over the years this has worked well for me.”

Joining Zalando, a company with a huge workforce and rapid growth, was an exciting prospect, particularly living in Berlin, the city of start-ups.

“There’s a startup on every street corner. That’s a super-interesting environment to be working in; there’s a lot of opportunity and a lot of interesting problems being solved. In amongst all of these small businesses and all the chaos that they bring to the table – which is a good thing by the way – out comes this company that began life 10 years ago selling flip-flops. That’s how Zalando started – literally only selling flip-flops online to the Berlin market. Ten years later it’s got 16,000 employees. By Berlin standards it’s huge and therefore it’s got gravity,” says Paul.

It was the size of the company that was the biggest challenge. As the company grew, one team became several teams and eventually a community, with a need for a different approach.

“As you grow and you become more of a community than a team, you need to start acting differently if you want to build a great product. The things you did when you were four engineers do not apply when you’re eight engineers and certainly do not apply when you’re 3,000 engineers. Most of what I’ll be talking about at the Berlin conference is how we learn and apply best practice from Open Source. When you have 3,000 engineers in a large company, how do you steward them to make a great product? How do big organisations like Zalando make Zalando happen?” says Paul.

His advice for the next generation of developers?