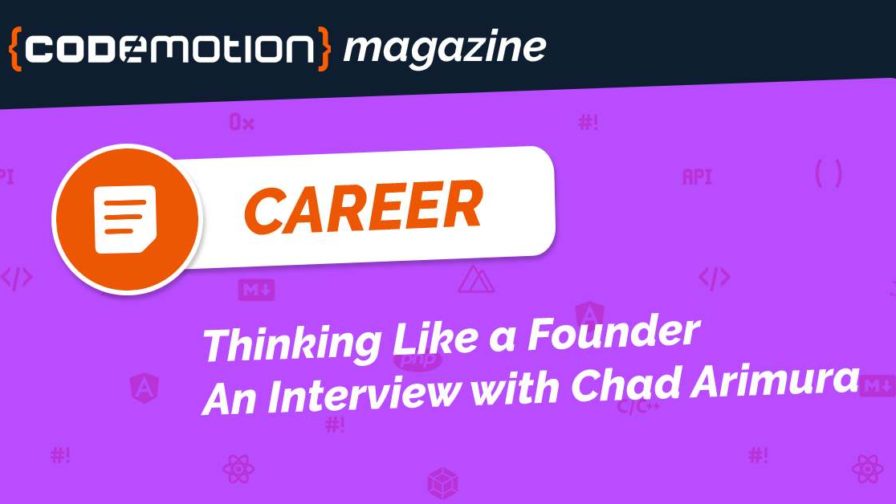 At Codemotion we’re fortunate to speak with a range of thinkers, leaders, and changemakers. At Codemotion Madrid 2019 we had a presentation by Chad Arimura. He’s a three-time entrepreneur, most recently as co-founder and CEO of Iron.io where he grew a multi-million dollar ARR business helping pioneer serverless computing including some of the earliest usages of the term “serverless” in 2010.

The company was sold in 2017 and he joined Oracle where he is Vice President of Serverless at Oracle, currently leading The Fn Project, open source serverless FaaS platform and orchestration.

We’re sharing some of the main themes of Chad’s talk, including some of his favourite quotes, take a look at the video below to enjoy the whole presentation.

The three main functions of leadership

According to Chad, the CEO has three main functions:

According to Chad, it’s vital for a founder to constantly strengthen the relationship of the founding team. “This involves things like dreaming together, getting out of the office.” He also believes in the value of therapy: “In my first company, there were four co-founders. As we were college-aged and didn’t entirely know what we were doing, we had a professional mediator that would actually come in every couple weeks to help us create a safe space to kind of grow together.”

In his second company, he had the opportunity to live with his co-founder and he notes, “Not everybody gets that opportunity. But it really helped us because, at the end of the day, we leave the office We’d come home, we’d have a beer together. And we actually evolved our relationship that way. So we really got to know each other.”

Executive teams and department leaders need to be empowered by founders who trust them to operate with autonomy. Chad asserts that “developers and engineers are really, really good at solving complex problems where you can sit down and you can zone out and you can kind of come up with a solution. It’s such a wonderful process to go through. But that skill that gets you to be a great developer or a great engineer is actually what holds you back as a co-founder or a leader of a team or a manager. And so you need to learn to empower your team.” He realised this with his last company where during times of difficulty “I would jump in, help solve problems, help keep the system up, I would watch the matrix of paper trail and logs and kind of, you know, do the kind of Keanu Reeves matrix thing. And suddenly, I would help solve the problem. And I felt like a hero. But on reflection, I was actually holding my team back from being self-sufficient in that.”

Chad sees company culture as critical. “Culture sets the precedent for how decisions are made when you’re not in the room.” He stresses, “You really want to make sure that you embody what you want to be in the decisions you make, and that you don’t expect your team to be something different.”

Vision: founders need to get out from their desk

According to Chad, “as engineers, we come in, and we solve problems, but we forget that what we’re actually solving a problem for some kind of business value or something was trying to guide our company towards something, having that vision. And just repeating that over and over again is absolutely critical.” Vision is what helps your team make decisions and needs to be continually reinforced.

You also need a product vision, which is acquired not simply by sitting in front of a desk. ” If you’re not talking to customers, you don’t know really what you’re building, because at the end of the day, a customer is what drives your business forward.”

Chad shared an anecdote, taking to a director of engineering at a major company who revealed they struggled to access A-list talent. The director revealed, “You know what, but that’s, that’s great because they’re passionate, they love their job. And what we found is that your product actually helps those B-players become A-players because we take out a number of the steps that complicate their lives.

And that is actually one of the realisations where we started using the expression serverless And around 2010 because we felt like serverless represented, removing complexity and doing less and making B players A players,”

In Venture Capital financing, money is never free and always comes with strings. Chad notes, “When somebody gives you money, generally they’re not just handing you a bag of money. Generally, they want that money back and they want something on top of that and there’s a timeframe to that.”

Chad believes that being solvent is important for startups as it means “you’re kind of off the treadmill for the most part because you don’t need more money.”

The synergy of founders and engineers

Creativity and innovation, in particular creating something that previously never existed or being able to solve a problem that has plagued industries or society for generations is one of the powerful aspects of working as an engineer. Chad shares: “Whether you’re part of a large organisation, or a startup, you’re here to create and that’s one of the beautiful things about being an engineer. It’s also a very beautiful thing about being a founder because you’re creating something out of essentially nothing. It’s really an incredible feeling. We’re pioneers whether we are part of a larger organisation or part of our own small business. So if things are not failing, you’re not innovating enough.”

Chad asserts that being a founder is not about being infallible, rather it’s about being a pioneer, ensuring strong relationships, trusting your team and having a vision to drive things forward.

“Be nice to nerds, chances are you end up working for one.”
-Bill Gates, founder, Microsoft

Which Goals to Set for Your Developer Career?