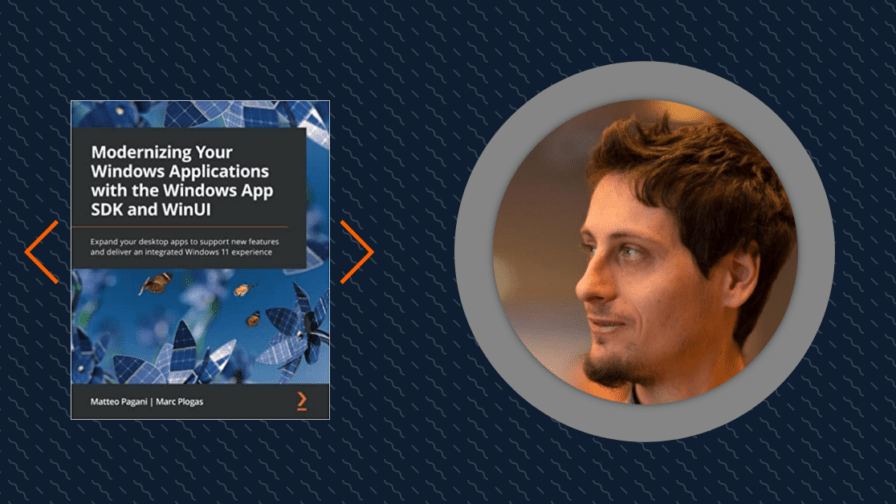 In this edition, we will have the chance to talk with Windows App Consult Tech Lead at Microsoft Matteo Pagani about his book. Register and watch it live!

More than 30% of developers continuously hone their skills by reading books in different formats! That’s why we’re meeting every month for our Devs Book Club, a place for sharing, learning, and drawing some inspiration together with great devs that want to share their experience with our amazing Codemotion Community.

Our guest for this edition is Windows App Consult Tech Lead at Microsoft Matteo Pagani, a real expert in all things Microsoft. We will be discussing his book: Modernizing Your Windows Applications with the Windows App SDK and WinUI: Expand your desktop apps to support new features and deliver an integrated Windows 11 experience

Matteo is a Software Engineer at Funambol, in a team that works on Microsoft platforms, such as Windows Phone and Windows 8.
Passionate about programming from an early age, he graduated as a computer expert in 2003 and graduated in 2007 in Information Sciences and Technologies in Como. Shortly after, he started his experience in web development. Over the years, he has also been able to bring his passion for mobile to the workplace with projects for iPhone and Windows Phone.

His passion for mobile and Windows Phone led to the opening of this blog and collaboration as an editor of articles and as a speaker for Microsoft and for various Italian communities and events, such as WhyMCA, Microsoft Community Tour, WPC, etc. He is an active member of the DotNetLombardia community.

In January 2011, he became a Microsoft MVP in the Device Application Development category, while in January 2012, simultaneously with the renewal of the MVP, he was assigned to a new category: Windows Phone Development.

In October 2012 he was named Nokia Developer Champion.

JavaScript: A First Look at the Type Annotation Proposal

Survey Reveals Four Types of Developers: Which One Are You?