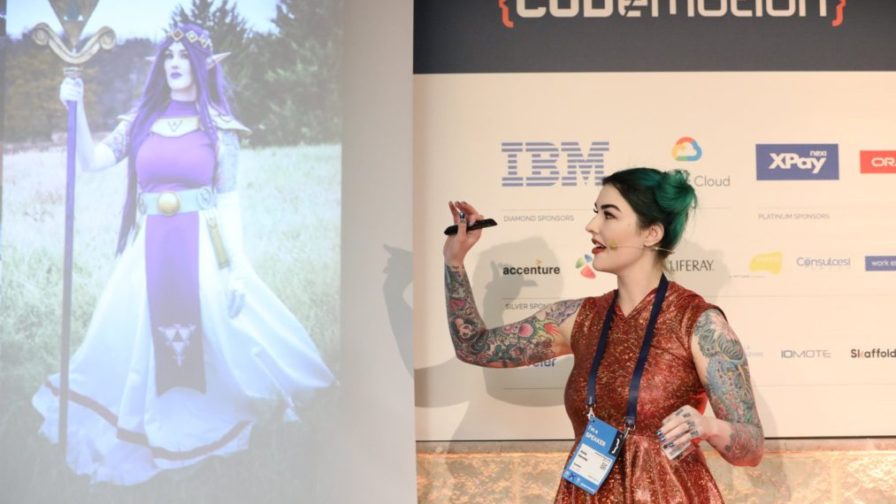 Amie Dansby is a passionate, very excited and successful woman living in (and of) the gaming industry. She has worked for huge names (such as Marvel and Game Stop, just to mention a few), and is now involved in the ATAT Tech, were they create technologies which don’t exist yet, literally.

She’s a Software Developer and much more. She’s a maker, into 3D printing, huge LEGO fan, Game Developer, Cosplay, very involved in the Wearable Tech, in love with AI (which she thinks it’s problematic for others as they don’t really understand it and need to try to learn more about it)

) and last but not least, since last year she’s into Body Hacking! Yes, she does have an RFID implant into her hand and she’s even willing to get more, as long as it serves more purposes. An example? She’s really looking forward to getting a Tesla to test it out!

Her passion for this very special niche started long ago when watching Jurassic Park for the first time, she decided to try to recreate that world. She was convinced dinosaurs did still exist, underground, and she wanted to rescue them. Once her father told her dinosaurs were extinct, she was fine just trying to create her own little dinosaur’s world, then a bigger one and then moving onto the next level.

But her journey in the High Tech/Computer Games Industry wasn’t easy. She was the only girl in her class and sometimes, it was hard to be taken seriously. Still, today that she’s so involved and so well known in the 3D Printers’ world, people can’t believe she owns 3D printers and, more important, she knows how to use them. The division between brains and beauty is still strong in today’s High Tech industry, and this is something Amie keeps on being surprised of.

In case it wasn’t clear, games are a huge part of Amie’s life: if she’s not busy developing them, she spends time playing them. The amount of hobbies she has it’s huge, to the point that she will have to give up on something to keep on going. She works over 50 hours per week plus she has her personal projects. When asked how does she manage to do so much in a day, she pointed out that the amount of available hours she has per day is the same we all have, she just needs to be very good at managing her time to be able to achieve targets she sets for herself. Her slogan is: sleep less, do more.

Amie is very much into doing what you are passionate about. If you don’t know what your passion is, try to find it and be open minded to new experiences which come your way. She’s a huge promoter of Makerspaces, if your ideas are not clear, she suggests to go into one of them and discover, try, produce.Nevertheless, she’s very involved in the Dallas Makerspace, a non-profit community which offers all kinds of workshops and laboratories where people have the chance to try out new things, experiment and learn.

She’s able to transmit so much passion talking about what she does. She has already been able to achieve so much and it’s just the beginning. Amie, can you please tell us how old you are? “Less than 40, greater than 30”. Isn’t this a great answer?

Do things faster and better with WebAssembly: an interview with Sendil Nellaiyapen

10 Predictions for Developers in 2019