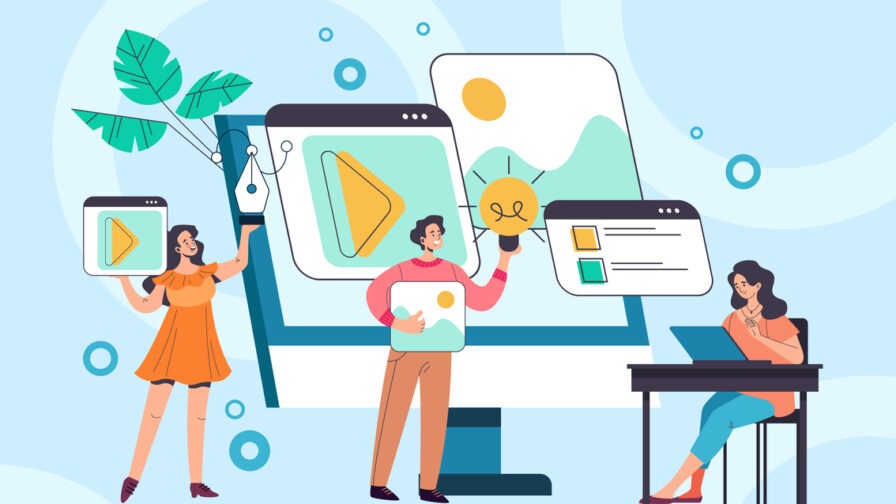 In this post, we’re going to touch on the most notable frameworks and the biggest trends for 2023. So, enough preamble, let’s dive in!

frontend developers looking for a fast and lightweight framework able to power their next project should be looking long and hard at Astro and Qwik. These two frameworks boast speed and efficiency, but those aren’t the only benefits they offer for developers.

Astro is a minimalistic framework that is built to be easy to use and fast to implement. The framework provides a basic set of features and tools that are crucial for building modern web apps, while still being highly customisable. Using the framework, developers can add only the features they need, which is a benefit in both customisability and efficiency. It is also very easy to learn, making it an especially good choice for developers who are new to frontend development.

Like Astro, Qwik is a lightweight, fast framework that is geared towards making it easy for developers to get building modern web applications. It features a range of tools for putting together single-page applications and is notable for its efficient use of resources and fast rendering times. It bears another similarity to Astro in that it is highly customisable, allowing developers to limit the features added to only the ones needed for the project.

If you are looking for a fast and efficient framework to power your next project, both Astro and Qwik are excellent choices. Both have the advantage of being suitable for everything from a simple application all the way up to a feature-rich, complex project.

CSS is, of course, one of the foundations of good frontend development. Though the world of CSS perhaps doesn’t move as quickly as that of frameworks—both front and backend—it does move, and it should be considered a critical task to stay up-to-date with this most fundamental of skills for a frontend developer.

One of the more exciting CSS features that we are expecting to become widely available going forward is the ability to use custom properties or “CSS variables”. This feature allows a developer to define variables in their CSS code that can then be used throughout their stylesheets. Essentially the same way variables work in a programming language like Javascript.

This makes it easier to maintain and manage code, as you can have a single variable for something you use globally like font size, padding, or margins, and make changes across the app or site by altering that single variable.

Grid layouts are already seeing widespread use, but that use is likely to grow over the coming years. This feature allows you to create complex, responsive layouts with nothing more than some simple CSS code, and provide a much cleaner alternative to methods traditionally employed.

A major driving force behind this trend is the prevalence of the use of mobile devices for accessing the internet, which doesn’t look like slowing down. Mobile devices—be they phones, tablets, or other devices—come in all shapes and sizes, and web apps that respond well to different display shapes and sizes are essential.

While we’re not mentioning a specific feature or trick here, it’s worth noting that there are already a number of techniques for creating complex animations and transitions with nothing more than a little CSS, and that number is likely to grow with more advanced techniques being developed in the future.

PWA is Back Again

PWA—Progressive Web Apps—are not new to the world of frontend development, but they are growing in popularity, and that popularity. PWAs are applications that are designed to feel and behave like native apps but are accessible through a regular web browser rather than requiring a separate download.

As we move evermore towards a cloud-based experience, providing a seamless experience across all devices is becoming more and more important. It also reduces the cost of maintenance, as an organisation using PWAs will not have to worry about maintaining a separate application. Or, worse still, several applications for multiple platforms.

If you’ve been paying attention, you will have heard of the revolution that is no code and low code platforms. These platforms make it possible for non-technical users to build automated business processes and build applications without the need for code or coding skills.

As the name suggests, these platforms can come in two flavours. No code platforms require little or no programming experience, often using pre-built templates or drag-and-drop tools. Low code platforms are geared towards more experienced developers and feature a more comprehensive toolset that can be used for more complex applications.

WebAPI is a framework that enables developers to build HTTP services within the .NET framework, making use of the standard GET, POST, PUT, and DELETE methods that are available through HTTP.

WebAPI is also highly customisable and easy to learn. Developers can get started quickly and create APIs to meet the specific needs of their applications. All of this makes it a powerful and flexible framework that is perfect for building modern RESTful APIs.

What to Expect From Jamstack and Headless CMS

Any frontend developer interested in keeping up-to-date with the latest goings-on will likely have heard about the Jamstack and headless CMS. These are two technologies that are set to have a substantial impact on web development going forward, so any frontend developer worth their salt should be looking to understand what they are and how they work.

The Jamstack is an approach to building web applications that are designed to be scalable, secure, and fast. Using modern tools like Git, APIs, and serverless functions, it is possible to build and deploy applications that are faster and more reliable than traditional web apps and can be scaled to meet the demands of a growing user base with ease.

It is likely that, over the coming years, we will see more and more developers adopting the Jamstack and Headless CMS as the need for faster, more scalable web apps becomes greater. This approach is more flexible than traditional methods, and any frontend developer hoping to stay ahead of (or at least keep up with) the curve should take a little time to learn about these technologies.

Quite possibly two of the most popular frameworks for frontend development are NuxtJS and Preact JS. Both offer a range of features and tools that make it easier for developers to build modern applications, but neither is new to 2023, so why are they relevant here?

Simply put, the growing popularity of both platforms—together with the fact that they are in active development and will continue to get new features—make them important to any frontend developer heading into 2023. They are popular because they are designed to be fast and efficient, but the truth is they are relevant here simply because they are immensely popular, and that popularity is set to increase over the coming years.

Either platform would be an excellent choice for frontend developers who are looking for a fast and efficient framework, whether they are building a simple application or a feature-rich, complex one.

There are many exciting developments on the horizon for frontend developers, and these are just the ones we know about! It can’t be stressed enough, however, that this is a competitive industry that moves fast, and you should always be striving not to be left behind.

How-To Guide: Creating a Blog in 5 Mins with SvelteKit