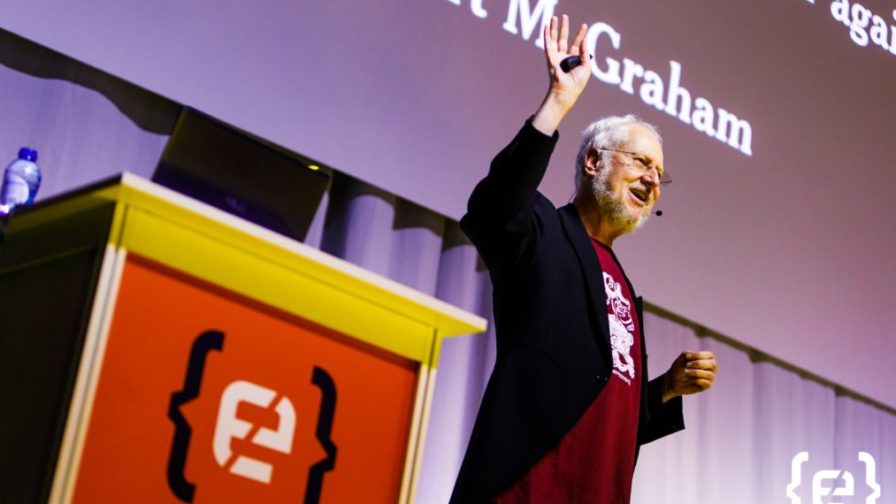 But when the American computer programmer and entrepreneur suggested there were good parts to JavaScript, the reaction was a tad more intense.

“When I first announced that there were good parts to JavaScript, that news was met with scepticism and threats of violence – there’s no way that could be true! But it is true – JavaScript does have some brilliant ideas in it. Taking functions as first-class objects with lexical closure, which we got from scheme, combining that with simple objects is just absolutely brilliant.”

As the author of How JavaScript Works, also developing various JavaScript-related tools such as JSLint and JSMin, Douglas is an expert in his field. But he is reluctant to accept all the credit for the success of JSON and JavaScript.

“I don’t want to claim to do things that I haven’t done. With JSON, for example, JSON already existed as a subset of JavaScript. What I did was I observed it in nature and gave it a name and showed how it could be used. But I can’t take credit for it. Brendan Eich created JavaScript. He deserves all the credit for everything that’s good about it.”

These days, Douglas is concerned about the web and the concept of corporate capture. Unless governments become more serious about regulation, he sees the problem getting worse.

The web was originally intended to be a totally decentralised, totally distributed document sharing system.

“We assumed that this intermediation would be one of the benefits from it, that middle men or intermediary distributors we wouldn’t need them anymore, we could all form immediate, direct electronic relationships with anybody we needed to do business with.”

“It didn’t turn out that way… there’s a very small number of companies now that are taking over ownership of the internet – you know who they are – and that’s distressing. So, for a time we were worried about government capture, certainly in China that’s an issue. It was predicted that the Great Firewall wouldn’t work but, in fact, it seems to be working really well. But a bigger concern I think is corporate capture.”

Machine learning and fairness, how to make it happen