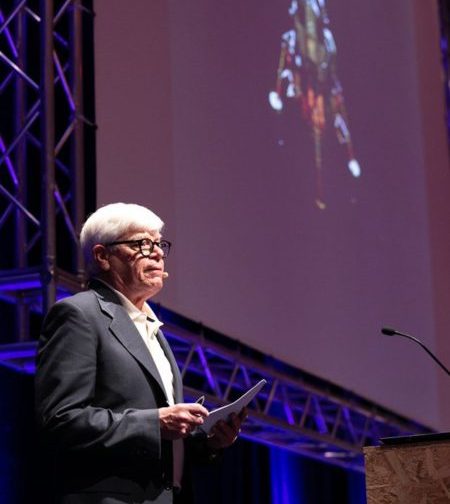 Codemotion Milan 2019 celebrated the 50th anniversary of the Apollo mission to the moon.

We were joined by Don Eyles, who worked on the Apollo Project from 1966 through 1972 and on the NASA space program until 1998 as a computer scientist at the MIT Instrumentation Lab and the Charles Stark Draper Laboratory.

He created flight software for the lunar landing phase of the Moon mission and was awarded NASA’s Public Service Award for his part in solving an in-flight problem on Apollo 14. He also invented a sequencing system called Timeliner that is currently in operation onboard the International Space Station.

Don spoke to the early challenge of “The role of the man vs the computer,” sharing:

“What we stared at when we wanted to think about the onboard code was paper. We used two languages in programming the Apollo guidance computer: the machine language that we called basic, and an interpretive language that made it much more compact to do vector matrix arithmetic – which is an  essential tool for navigating in free space.”

When Apollo 14’s “Abort” switch jammed before the Lunar Excursion Module was getting ready to land on the moon, Don had limited time to write a new batch of code that would instruct the computer to ignore the switch and allow the module to land without issue.

Otherwise, the module would abort the moon landing and return home. His success earned him accolades for saving the Apollo 14 mission. Don attributes this to a team effort in Cambridge of programmers.

Don spoke to the coders in the audience:

“We coders were empowered to take the initiative. NASA didn’t quite know what to make of us. So they to some extent left us alone to pursue our own methods. Flight software was a wide-open field: a junior engineer like me could actually work directly with Apollo astronauts to develop ways of improving their ability to land.”

“Coding is still mysterious to many people, including perhaps to some of the managers who find themselves in a position of managing coders. They may not understand the art itself, but they must have the responsibility to consider more than the immediate utility of the code, but also its ultimate nobility.”

During Codemotion Milan 2019, we were also joined by members of live:js: Jan Krutisch, web hacker and musician, Ruth John, digital artist, Sam Wray, experience technologist. Live.js is a collective of visual and audio artists that bring audio and visual code to life, in live performances across the globe.

The trio opened the conference with a performance dedicated to the Apollo moon landing. A multitude of visual overlays intersected with newsreels, snippets of speeches and photographs, underpinned by electronica infused with psychedelic rock.

The collective is made up of artists from across the global including Germany, the UK, New Zealand and Amsterdam.

The trio shared their experiences in a technical workshop as well as an interview with Codemotion. They deploy a range of technologies. Ruth built Vizra in Javascript which runs in a browser.

During the technical workshop, she gave a demo of her Audio visualization starter kit and detailed their use of Web Audio API.  Jan shared the teams detailed GitHub repository, while Sam took a deep dive into the modv ecosystem, Canvas API, and WebGL.

According to Jan, the trickiest bit of their performances is that it’s not a stable environment.

“We tend to work separately and then bring it all together quite last minute and just improvise quite a lot”.

But there’s a number of things that can go wrong.  “Often conferences are not really prepared for the kind of equipment that we need, and so sometimes we run into last minute problems, where we need for example to figure out how to get audio properly delivered.”

Ruth shared a story of a performance where they had one of the Google engineers that does dev outreach sitting with them and he was: “Poking around a little bit in the process manager in Chrome and then gave us this pseudo command to change the process priority the browser. And it’s been stable ever since.”

“We now know a lot of people at the browser vendors, so we can actually directly talk to people and say ‘hey, this doesn’t seem to be working, what’s going on there?’ Then they can go back to their teams and ask around. So that’s pretty cool.”

I am a child of Apollo

Engineer and writer Russ Olsen, delivered a keynote at Codemotion and was interviewed by us. He talked about the moon landing from his perspective as a 10-year-old kid:

“In the summer of 1969 I knew enough to know that people are landing on the moon. It was like the brightest light I have ever seen in my life, it just changed the way I saw the world.”

“If you’re a person who’s thinking about trying to do something a little crazy, maybe you should look at other crazy projects that actually succeeded. One of the key reasons that the moon landing succeeded is that they decided to do it in the first place, so I think that’s kind of a general lesson in life as well as in technology.”

Russ related this kind of innovation to the life of developers and programmers:

“It’s our story. If you love technology, if your one ambition in life is to build things, if you roll out of bed every morning and think ‘I’m gonna work on this thing I’m working on’, then this is your story.”

“ I am a child of Apollo. I sat on that couch and my life changed. It got off of whatever path that had been on and it got on a different path that led me to the University and to engineering and computer programming.

Codemotion Berlin: SuperMario and PacMan Is Where ML Lives Now