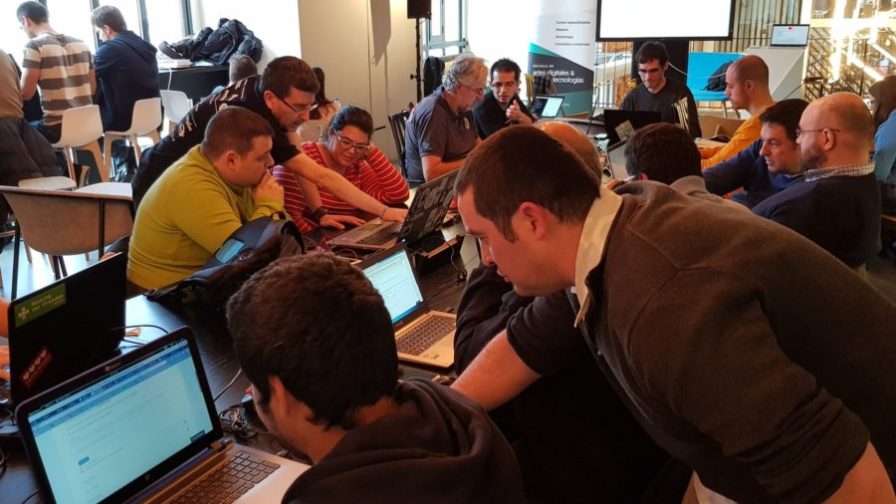 At Codemotion, we are all about helping and supporting people to build vibrant, welcoming, and inclusive community groups. At Codemotion Madrid 2019 conference we spoke to several community organisers to gain an insight into their experiences in building and running community groups:

David is the Lead Android Engineer at Mixtiles and a Google Developer Expert for Android who has been developing with the Android platform since 2009. He’s actively involved in the community, organising the Kotlin User Group in Belgium, and helping the GDG Brussels.

He praises the simultaneous independence and support of the Kotlin community, “You can always choose what you want your meetup to be about.” The group has sister communities in London and Berlin, and David notes: “London is the biggest Kotlin group, followed by Berlin and Brussels”

Attendees from London tend to be more corporate, while attendees in Brussels are from quite similar companies. The Brussels group has co-organised events with the Kotlin Users Group in Amsterdam. Google and Jetbrains are available to help in terms of resources, speakers and workshop facilitators as needed.

Codemotion Madrid was one of David’s first dev conferences, and he compliments that:

“Speakers at Codemotion conferences are way more into diversity and come from very different backgrounds compared to other events”.

He recommends the conference as a great space for resources, networking, and assistance in community building.

Community is More Than Just a Meetup: Ember.js

We spoke to Sergio del Valle and Rubén Guerrero from Ember.js, who shared their insights into the growth of the Ember.js community.:

“It ́s a way more than a meetup, but rather an event for the community that includes people from a different level of knowledge so that everyone can help and support each other. “

The Ember.js community includes extensive resources and documentation, a discussion forum, job boards and even mascots!

“It is important for us to reach out with platforms like Codemotion, because it increases our audience and it allows up to bring more people to our events and to promote more and better our projects.”

Be Part of an International Community: HackMadrid%27

We talked to Kneda, Daniel Mery, and Lórien Doménech from HackMadrid. The organisation strives to be at the forefront of research and experimentation, regularly attending events organised by the community. They participate in national and international conferences on hacking culture (Defcon, BlackHat, HOPE, OWASP AppSec, Hacker Halted, Black Knife, Rooted With, CyberCamp, among others).

The inclusion of %27 denotes their membership of an international hacking community: Percent 27 (% 27), along with HackMiami, Hack The Bay and HackNewYork which promotes the use of Free Software technologies and actively collaborates with other communities, stimulating “multi-community” events.

Daniel shared: “A very arrogant journalist upon seeing the logo of HackMiami and New York (there was a .php code), wrote an article saying ‘these hackers always want to create their own language’, but for sure, here with 27%, we have written, our own language.”

HackMadrid%27 develops and promotes the participation of the entire hacker community through regular meetings, presentations, workshops, CTF and any event that helps strengthen the “hacking” culture.

Their activities build an appropriate forum to present research, developed new techniques and methodologies while providing a valuable human resource “knowledge”, which together with “intelligence” allows the development of projects.

“We really want to take back the old concept of hacker: a curious person, that wants to experiment and reach knowledge for knowledge’s sake, rather than for a financial reward.”

According to the trio, Python is one of the most used languages by hackers, but everyone has their own favourites, and “we keep on using different platforms.” The group started with 18 members but today stands at over 3000.

They’ve organised a couple of highly successful conferences, including a Linux party in 2018 and a conference this September called Tech party with over 700 attendees. It covered themes such as cybersecurity, blockchain, functional programming, social media, and hardware. D

Daniel shares the value of collaboration:

“As a hacker group, we know it’s a cultural philosophy that is not limited to a single idea, but that we need to open up to further communities in events like Codemotion, in order to create a sort of tech ecosystem from which anyone can benefit.”

The Vue.js Madrid group is part of a bigger ecosystem of resources and community tools. We spoke to Javier Abadía , one of their organisers. He shared that the group provided “a knowledge interchange from which everyone can benefit.”

Unlike other community groups, they have no sought formal funding or aligned themselves with any professional registrations.” Our work is sustained by ourselves and the community itself.”

We asked about the difference in problem-solving in the Vue.js users based on their levels of experience. He shared:

Javier has been attending Codemotion annually since 2015 and notes that he enjoys: “The atmosphere, the organisation and the location.” He believes that Codemotion offers an excellent opportunity to help communities “increase and exchange knowledge.”

We also spoke to Daniel Mery about his role organising the Haskell Users Group. After four years they host around 900 members and “organise a lot of events in order to build a positive narrative about the concept of functional programming, resulting in the absence of side-effects in programming computer programs etc.”

While it would be easy to think the next big thing could replace interest in Haskell, Daniel notes that unlike other platforms that become outdated, “Haskell provides a language that always ‘remain fresh.

Interestingly Daniel notes that while functional programming remains marginal, “even though all the imperative languages are starting emulating functional languages – (It’s a strategy to save money).

He compares the example of learning Chinese as an adult compared to those who learn as children: “If you’d like to learn it, it will take you a lot of time and huge effort, as you will be making comparisons with other languages you speak when in the process of learning.

So it works better if you start learning it when young, especially because Haskell does not allow the option of ‘copy and paste,’ so either you learn how to program or you can’t.”

Daniel compares it to martial arts, “if you want to become a black belt (10th dan), it takes a lot of time and endurance, but then you master karate.

The Haskell Users Group “organise events not only for Haskell users but also reach out to other communities to raise awareness and interest in our initiatives and mission.”

Codemotion recently launched a platform to help community organisers promote their events through our website. Take a look and find an event near you, promote your event, offer to speak at a meetup, or start something new.

Codemotion Madrid Offers a Plethora of Diverse and Engaging Topics