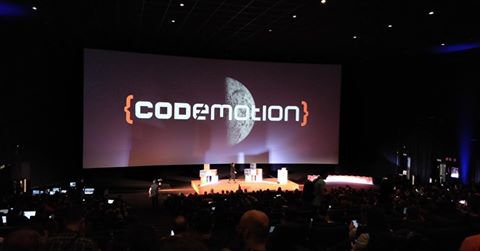 Codemotion Madrid 2019 bought more than 60 internationally renowned speakers, hundreds of tech leaders, innovative business owners and community members together for a two-day event designed to take you on a step-by-step journey through every topic about software development and technology.

The topics were diverse and engaging, here are just a few of the topics discussed:

He created glasses that could utilise facial recognition technology (using Face-api.js,) to recognise his friends and share some data about them on a viewed text box. This data and photos would be stored only on the device.

The project was achieved through the use of Vueline, powering, RaspberryPi and a platform he created called Rubeye designed for wearables, with a focus for prototyping (Angular, Vue, Node).

Ruben tried a number of controller options including a Bluetooth controlled gamepad (nixed because of the need for a custom interface) and settled on a high-performance progressive web app built with ionic.

Their UI tool kit allows you to create high-performance mobile interfaces and comes with icons, available for Angle, Vue and React. The remote app could community with Vue via socket.io.

The end result was deemed impractical, and heavy but suitable for prototype development. It was a project with a “low entry opportunity for developers” and Ruben shared that in the future he would make the software web-based and framework agnostic.

APIs are the new attack vector

Cybersecurity is a constant pain point for developers. Isabelle Mauny. CTO, of 42Crunch, shared how APIs are the new attack vector with apisecurity.io identifying over 150plus public issue reports since October this year. She attributes the attacks to a range of causes including:

She demonstrates several use cases of token misuse noting “API keys and OAuth secrets are leaking all over GitHub”. Isabelle advises devs to implement authorization check to validate the user actually owns the data they are trying to retrieve, citing the example of an N26 security error where the ID customer number printed on the card for identification purposes was actually embedded in every repro.

She also offered insights into the Equifax and Instagram security breaches and reminded devs to always be aware “What is the sensitive data that you manipulate?” Isabelle showcased various security dev tools including PIXI, an API that exposes API security issues and is part of the OWASP DevSlop project.

You’re never too big to fail

No one likes to think of their failed projects but Marcos Holgado, formerly Senior Android Developer, Sky offered an invaluable, honest account of their failure at modularizing the sky sports app. Modularization is the new trend, almost everybody in the Android ecosystem is refactoring their apps to use a modularized approach:

“We at Sky were no different, we had a big monolithic codebase supporting 4 apps in different countries that we started modularizing in September 2017. But we failed, big time.”

Marco noted that “Flavors traditionally have long built times, you change one thing you break many others, painful to work with, it doesn’t scale

These were why we moved towards a modularized codebase.” He shared the temptation to overcomplicate things until they make no sense, questioned the node for a core module, and shared:

“We did this streaming module, we didn’t really understand how data works and we ended up with something that we didn’t trust. He also shared the companies time waste in creating a showcase app “which didn’t work and wasted a lot of time” and how they “eventually started re-building a maintainable, sustainable and extensible modularized codebase.”

“If you really think that you’re too smart to fail. Well, if your whole team can’t understand the code then you’re failing.”

Olya Kudina, Postdoctoral researcher at Delft University of Technology took a look at the ethics of voice assistants, asking “What values and ethic do designers and devs bring into their work?” She showcased projects such as Q, the genderless virtual assistant, Project Alias with their DIY attempt to secure our voices, and research by the UN into  XX

Olya championed value-centred design for developers as a tool within their teams where “moral values can be expressed in engineering design” and share exampled where voice assistants are life-changing such as helping people with dyslexia pronounce and spell unfamiliar words.

By comparison, Alex Fernández, CTO at Influencity took a look at the promise of AI citing “the 19601960s’s were a time of optimism for AI” and how far we actually are from actual smart behaviour. He showed the science of scrambled images where only one-pixel attack was needed to fool deep neural networks form recognising an animal and the disturbing police responses to the failing of facial recognition in public spaces.