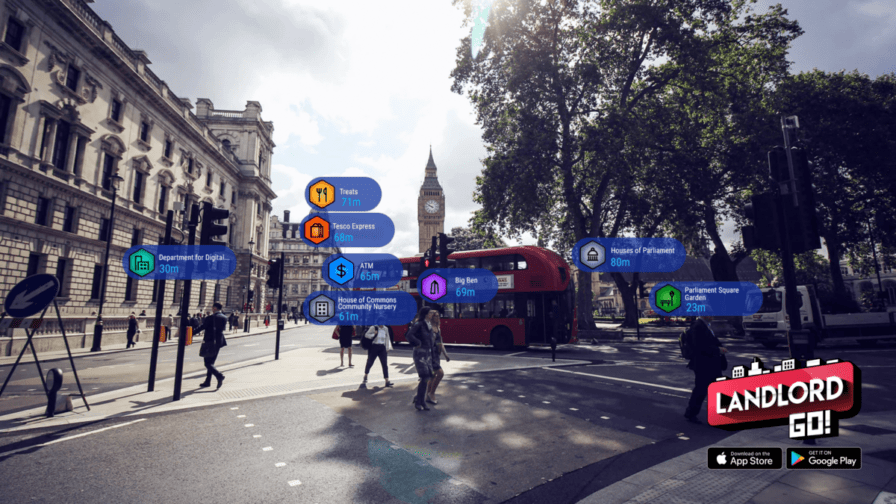 You might remember a time when Pokemon GO was the biggest mainstream AR game, downloaded over 1 billion times, and named “Best Mobile Game” by The Game Developers Choice Awards and “Best App of the Year” by TechCrunch in 2017. While the hype might have died down, it’s still a popular form of entertainment and paved the way for a new wave of mobile AR games.

In its first few days became the top app in Germany with over 1m players an reached the number 1 spot in the Google Play New & Updated Game rankings in the U.S. and 50 other countries after being featured on the Play Store throughout its July 16th launch.

Players can start small, buying up local corner shops, and quickly amass a vast real estate empire through savvy investing. Put properties on the market, or engage in bidding wars with other players. Landlord Go reflects real-world values of properties using details like distance from the city centre and building amenities.

Anytime another player visits your property in real life, they pay you rent in the game. Each building has a unique daily performance based on real digital footprints. The more visitors your property gets, the higher its value. Currently, in Berlin, there are 31, 271 players making deals for virtual ownership of the 153, 517 real properties.

The use of satellite imagery and location data

To ensure the game has the largest playing field possible, the world is divided into 10 billion unique plots with a little help from NASA. Reality Games uses their own property data set combined with NASA satellite scans showing nighttime light emissions.

The game tracks half a billion real-world properties. Buildings in the game have the correct simulated height that corresponds with the real world versions, with image recognition and location data available through the AI camera feed.

Using a proprietary AI and data platform called Big Dots, the team is able to add real-world data to desktop and mobile apps.

The company accessed data in their previous game by data scraping APIs from location sites such as Foursquare and their data now comes fromThey now use scraping and their own database which scrapes data from over 3000 open data sources.

They now also have the opportunity to gain real-time user-generated data. As John explains “We have about 150,000 agents (players) who ensure that the buildings detailed in the game are accurate in return for tokens”.

For each location to be verified, it requires three people in the same location to verify the exact location of buildings.

According to John, 95% of the time building the game was spent on the backend site compared to the front end:

“The game from the front end side is done on Native. However, it’s inherently a back end game; the front end is just showing the logistical information. And this is very, very different compared to other games because most of the games are front end based.

Leaderboards and the position of players compared to other players are the only communication between the server and client.”

John notes that the game has limited AR functionality via the phone app and that the company is waiting for new AR hardware, “the new game-changer, the new marketplace when Apple introduces its new AR lenses. When you put on the glasses, suddenly you have another layer of smart information. The game is ready to go; we just need the hardware.”

What are the most challenging aspects of building a game for AR?

John explains that some of the problems are not what you might to think. For example, where you place an icon in AR:

“If you are standing 300 meters from a building, the icon should be positioned at the top of the building. When you are coming closer, it should align with the entrance. Thus, we are working with our agents to put the location of the pin appropriate to a 3D environment.”

There is also the additional UX challenge: “When you are in a very popular place, you will be able to see suddenly 800 points of interest in a 200-metre radius. So you need to filter them by date and location. But the original Google data is problematic because the maps were built by satellites and by autonomous cars using street view and they didn’t put the location precisely with the building”.

When asked what advice he would give to aspiring game devs, John advises. “Create the first one, publish it yourself from home, and try to understand why it didn’t fly. It’s essential to understand the entire process. Because it’s complicated, it’s not only coding or game design.

Learn from how your players behave. You can gain insight into retention. You can understand what people like, what they dislike, and why they have left.

And by slowly observing those things, you learn how to build games. And then it’s only the scale, and the scale is related strictly to money. But it’s still possible to build an app, build the game, from the bedroom, and be successful.”

Learning DevOps: What are the Best Online Resources and Tools in 2020?

COVID-19 and the Future of Remote Work